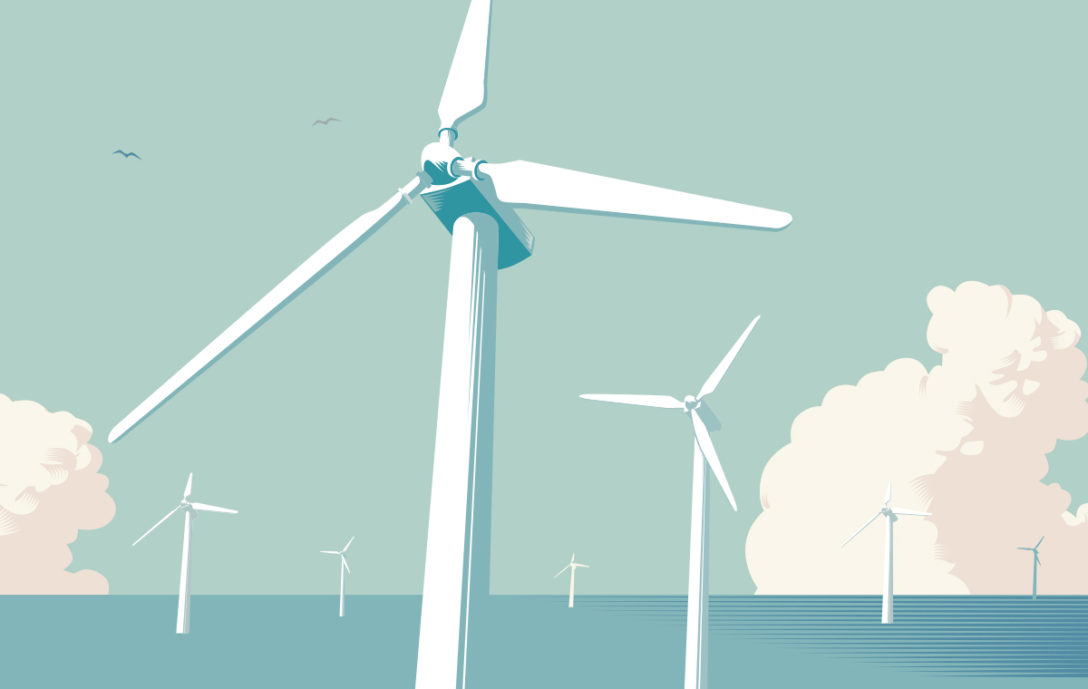 At the end of March, the White House announced a government-wide effort to advance America’s offshore wind industry, which currently comprises just two operational wind farms, Block Island and a pilot project completed off the coast of Virginia last year, equating to a mere 42MW of power generation combined.

“President Biden’s announcement is very significant, particularly plans to complete review of at least 16 Construction Operations Plans, or COPs, by 2025,” says White & Case partner Marius Griskonis, who advises on renewable energy transactions. “The plan is not only theoretical, but also names three projects that are undergoing or are expected to complete the environmental review in the near future – Vineyard Wind, South Fork and Ocean Wind. Seeing the projects get off the ground and start construction and then operations would clear the way for the entire offshore wind industry.”

“The mere fact that we now have an administration that is enthusiastic about offshore wind and determined to push it forward will make a big difference,” adds Ed Crooks, vice-chairman, Americas, at Wood Mackenzie.

“A lot of the necessary building blocks are already in place. We have companies keen to develop offshore wind. We have capital ready to be deployed and sites all down the Northeast and Mid-Atlantic coast, from Maine to North Carolina. President Donald Trump was personally sceptical of wind power and his administration moved painfully slowly in terms of environmental approvals. Having a supportive federal government in place will remove one of the crucial brakes on the growth of the industry.”

But lack of federal support has not been the only obstacle to a flourishing US offshore wind market and “Biden’s announcement doesn’t mean that all the industry’s problems have been magicked away”, Crooks cautions. There are a number of reasons why the US offshore wind sector has lagged behind Europe and not all of those will be readily overcome.

First, of course, there just has not been the same need for offshore wind in a country blessed with the wide-open spaces of Texas, Oklahoma, Iowa and other big, wind-generating states. The US simply has not faced the same land supply issues as densely populated Europe. As a result, the US also lacks the domestic industry that has grown up around European offshore wind. Tellingly, the most active players in the fledgling US offshore market are Ørsted, Equinor, BP and Iberdrola, all European companies. “Again, that can make it harder to get the industry off the ground,” Crooks says.

Another challenge the US offshore wind sector has faced has been competing demands on the ocean, from wealthy individuals determined to keep their beachfront property views unspoilt to a vociferous fishing industry committed to protecting its commercial interests. “Permitting delays, regulatory constraints and nimby [not in my back yard] issues have all stopped the US offshore wind market from developing at the speed we have seen in Europe,” says Griskonis. “The industry has effectively been on hold for the past couple of years due to the slowdown in completion of the environmental review for the first commercial scale offshore wind project on the East Coast.”

Meanwhile, the current administration’s enthusiasm for offshore wind has intensified the fishing industry’s resistance due to concerns that approvals will be rushed and not enough research carried out into downsides, Crooks comments. “That is creating a great deal of tension.”

And while one advantage of offshore wind is that it avoids the need for infrastructure covering large distances by land – which inevitably faces legal challenges at some point along its course – those legal and regulatory issues continue to present obstacles nonetheless.

“Building any kind of physical infrastructure involves some challenge, including navigating federal and local approvals,” says Geoffrey Strong, senior partner and co-head of infrastructure and natural resources at Apollo Global Management. “The administration’s plan pledges to accelerate regulatory reviews and make them more predictable, which is important. Capital investment isn’t enough to accelerate the deployment of infrastructure such as big clean energy projects. We also need a regulatory structure that prioritises their completion.”

With a president committed to ensuring that supportive regulatory structure is in place, therefore, and with technology costs tumbling, it seems certain that the US offshore industry is heralding a new dawn, unleashing a mountain of investment opportunities.

“Even before the announcement, over the past couple of years, we have seen an increased interest in US offshore wind,” says Griskonis. “Some developers have been very active developing and buying projects. These are large and capital-intensive projects that will provide many investment opportunities. We will continue to see the creation of joint ventures that combine offshore wind development experience with capital.”

And while Ørsted, Equinor, BP and Iberdrola are currently dominating, other European energy companies, such as Shell and Total, are also poised to get in on the act, taking advantage of their knowledge of these offshore operations. “As the industry matures, and the ability to get large scale offshore wind projects built and brought into service, and operating profitably, is proven, a broader range of investors is likely to come in. That is when I expect to see institutions start to become more interested,” says Crooks.

Some are already making the move. Copenhagen Infrastructure Partners is involved in Vineyard Wind, a utility-scale wind farm located off the coast of Massachusetts that on 11 May received final federal approval; while Apollo has recently invested in US Wind, off the coast of Maryland. “We are big believers in the outlook for offshore wind generation in the US, which was already on a strong growth trajectory but which we think can be accelerated by Biden’s plan,” says Strong.

Investment into the offshore wind farms themselves is not the only investment opportunity stemming from Biden’s embrace of the sector, of course. The entire supply chain will create enormous manufacturing and infrastructure opportunities. “Developing supporting logistic infrastructure, such as ports and installation vessels, and promoting a fully-integrated supply chain are amongst the most pressing needs to make this a success,” says Stéphane Kofman, who leads new strategic initiatives at InfraRed Capital Partners, an infrastructure manager experienced in the European offshore wind industry that is watching developments in the US closely.

Employment is a fundamental component of Biden’s offshore wind strategy. It is no coincidence that his infrastructure roadmap was titled the American Jobs Plan. The president is committed, therefore, to ensuring this supply chain is developed at home.

“Our goal should be to do more than simply import European technology and expertise to build out this huge clean energy resource,” says Strong. “By investing in new port facilities and new manufacturing capacity, we can deploy many gigawatts-worth of clean energy from large projects located just off our coasts, all while using American components built and installed by American workers. The offshore wind sector is now poised to go from demonstration-scale projects to utility-scale generation capacity. Given the scale of these projects and the components and infrastructure needed to support them, we think this will lead to an industrial boom that will greatly benefit our coastal cities.”

Indeed, the investment potential contained within Biden’s announcement is enormous if the roadblocks around permitting can be overcome, most notably legal challenges from the fishing industry. “These plans need to become reality. After years of challenges and delays, the offshore wind industry desperately needs to see the first commercial scale projects start construction and operations,” says Griskonis. “If that happens, there is enormous potential, not only to catch up with Europe, but to actually start leading the industry in certain areas, such as floating offshore wind.”