This article is sponsored by Africa50

Like elsewhere, covid-19 is taking its toll on Africa. The continent’s predicted GDP growth of almost 4 percent in 2020 has turned negative instead. However, this should be a temporary pause in the long-term positive growth trend of the continent. Pre-covid, Africa had seven of the 10 fastest growing economies in the world; GDP growth, capital inflows, and trade volumes were improving; and 18 countries had achieved medium to high human development status.

Infrastructure demand in Africa is driven by a growing, urbanising population of 1.3 billion. New markets are being created and existing ones are expanding. Furthermore, investors can be satisfied that their investments are having a positive impact on people’s lives. As its infrastructure improves, Africa can increasingly tap into its vast human and natural resources, thereby generating higher employment and government revenues, which will in turn allow governments to develop more infrastructure, creating more opportunities for investors.

There are many good infrastructure investment prospects, from traditional sectors such as energy and transport, to sectors that gained urgency because of covid, such as information and communication technology, healthcare, sanitation and education. Health infrastructure, traditionally the domain of the public sector, is becoming more attractive to private investors. The middle classes are growing, becoming more health conscious and, with increasing purchasing power and access to health insurance at their disposal, they are willing and able to pay for modern healthcare. The ICT sector will need an additional $100 billion over the next decade to connect all Africans, with a third of that going to fund the related infrastructure. And power generation has taken off in the last decade, using Africa’s ample solar, wind, geothermal, hydropower and gas resources.

Finally, the implementation of the African Continental Free Trade Area (AfCFTA), which officially launched on 1 January, should create larger regional markets and economies of scale for investors.

The World Bank estimates that full implementation could boost Africa’s income by $450 billion by 2035, a gain of 7 percent. AfCFTA should also boost support for investments in regional projects, which in 2018 represented only 2 percent of the overall $100 billion invested in African infrastructure, according to the Infrastructure Consortium for Africa.

Private capital can fill the gap

The African Development Bank estimates that overall infrastructure funding needs in Africa are $130 billion to $170 billion a year, with a gap of $68 billion to $108 billion. Most countries have increased their funding of infrastructure, and public and development finance institutions’ funding is expected to continue playing an important role. However, with growing debt burdens and the constraints of the pandemic, governments are eager to attract private sector investment. To do this, they know they are competing in a global marketplace, so they are working hard to improve their investment climates to make them more attractive for investors.

There have already been many successful private investments in African infrastructure in recent years. In 2019, Sub-Saharan Africa alone received $6.2 billion in private capital across 23 projects, 28 percent more than the five-year average of $4.9 billion. With continued appetite from developers and financiers, and growing demand, we should see further increases.

One mechanism that could help African countries increase private sector participation is asset recycling. Under such programmes, governments free up their capital for new infrastructure by granting concessions to private sector companies for existing publicly funded, revenue-producing infrastructure such as toll roads, telecom networks and airports.

Africa’s increasing number of private equity funds have already shown the way. They realise that the risk-return profile on the continent is quite attractive if projects are properly prepared. Prior to covid, almost two-thirds of limited partners believed Africa would be more attractive than other markets over 10 years, with fundraising in 2019 increasing to $3.8 billion from $2.7 billion in 2018. An African Venture Capital Association survey also revealed that although by April 2020 49 percent of general partners expected covid to delay their timelines, only 29 percent thought it would lower their fundraising targets.

PPPs and equitable risk allocation can make the difference

Public-private partnerships, the favoured model for attracting private financing, can enhance the quality of public services, since competitive tendering should uncover competent private partners that can provide experience, skills, technology and funding not available in the public sector. However, to be effective PPPs must be negotiated transparently and structured well, so governments have an interest in building their capacity in this regard and investors’ confidence in a fair process that makes an efficient assessment of the risk-reward balance possible. One way is to create a dedicated PPP unit that has high-level support and brings together resources from key ministries such as finance, infrastructure and legal affairs. According to the World Bank, this is progressing well – 39 of 54 African countries now have PPP laws in place and 33 have a PPP unit.

Regardless of the PPP delivery mechanism chosen, governments have the most important role, notably with regards to the allocation of risks, which must be consistent with the development stage of the country and the sector in which the project is being implemented. The private sector usually takes on financial, technical, construction and operational risks, while governments should handle regulatory, foreign exchange and political risks. In countries where sectors are not yet bankable on a standalone basis, governments should also cover the risks linked to commitments made by the utilities and other entities involved. Development finance institutions can play an important role in mitigating risks, either de facto by simply investing in a project or de jure through partial risk guarantees and political risk insurance.

While much depends on the public sector, investors must also play their part. They should take a long-term view and be proactive, deploying more early-stage risk capital and other resources into project preparation, as this is key to developing bankable projects.

Attention to ESG factors will pay off

Investors are increasingly interested in ‘doing good while doing well’ and Africa is fertile ground for highlighting their work, given the continent’s socio-economic challenges. Impact investments also make business sense, since they can produce market rate returns and have lower volatility.

While some governments are putting ESG regulations in place, others have not. But only three African countries – Botswana, Mauritius and Morocco – are ranked by Morningstar as having below-average ESG risks. Therefore, investors and their partners must set a standard above that required by local law, if they want the project to get broad support. ESG factors are increasingly becoming crucial elements for investment decisions, so this will pay dividends for finding additional partners and assuring the long-term viability of projects. However, ESG factors must take into account the reality on the ground so as to enhance projects’ value proposition and not thwart their implementation.

To sum up, the covid-19 pandemic has changed the infrastructure investment landscape in Africa over the short term, but the fundamentals remain the same. The continent is forecast to return to growth in 2021 and there are plenty of opportunities for savvy, well-prepared investors. Africa50, with its access to its 28 shareholder governments, and expertise in project development and private equity investments in infrastructure, stands ready to work with them. 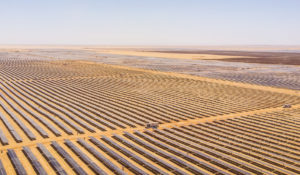 With the right regulatory regime and cost structure, the private sector, backed by institutions and regional partners, can make solar power an attractive investment opportunity in Africa.

Benban is a 37-square-kilometre solar park so large it can be seen from space, with more than seven million photovoltaic panels and funding of $4 billion. It results from the Egyptian authorities’ ambitious vision to harness solar power. Thirty international infrastructure developers invested in this solar park in Egypt, one of the largest in the world, which will generate 1.5 GW – enough to provide renewable energy to more than one million homes and avert two million tonnes of carbon emissions that would have been produced by thermal plants. Africa50 was among these developers, joining Norfund and Scatec Solar to finance the construction, through equity funding, of six of the 32 utility-scale solar power plants totalling 400 MW in the complex.

Senior debt was provided by the European Bank for Reconstruction and Development, the Netherlands Development Finance Company, the Green Climate Fund, the Islamic Development Bank and the Islamic Corporation for the Development of the Private Sector. Moreover, the consortium is pioneering new technologies such as bifacial solar modules, which capture the sun from both sides to increase generation. The plants are supported by 25-year PPAs with the Egyptian Electricity Transmission Company under Egypt’s feed-in tariff programme, backstopped by a sovereign guarantee.

Benban is a demonstration of a fundamental change in the way African countries can provide power for their people. For decades, the Egyptian government had built and operated most power plants and was spending more on electricity subsidies than it was on education, healthcare and social welfare combined. Providing the enabling environment for the private sector to invest in the country’s energy infrastructure allows the government to focus on other pressing priorities.

Benban is a good example of how early-stage project development expertise and financing can be used to rapidly bring a project to financial close and then inject equity to encourage broader financing, including senior debt. We were able to help accelerate the process by acting as a bridge between the private sector partners and the national authorities. It was the first time that our project development arm, Africa50 – Project Development, had successfully exited one of its projects through a sale to our equity arm, Africa50 – Project Finance, a model we have since replicated.