Sharad Malhotra, who has been with Global Infrastructure Partners since March 2008, will co-head GIP India following a move from New York to Mumbai. He will work alongside co-head MK Sinha, the latter told Infrastructure Investor.

The move follows the 1 July close of GIP’s acquisition of IDFC Alternatives’ infrastructure vertical, with its transformation into GIP India now complete.

Asked if GIP India was planning to launch a new fund, Sinha declined to comment other than to say that when Fund III is launched, it will be an India-dedicated vehicle.

“As of now, we’re focusing on deploying Fund II,” Sinha said, referring to IDFC Alternatives’ India Infrastructure Fund II, which closed on $900 million in October 2014. “We still have $100 million left to deploy and we have six or seven deals in the pipeline. It depends on which deal is the most doable but it has to be strategic.”

He added that “ideally, I’d like to bulk up or consolidate our existing platforms”, which comprise roads, renewables, telecom towers and freight terminals.

While he did not provide details regarding the deal pipeline, Sinha said that “we’re unlikely to do something totally disconnected from what we have already created”.

According to comments Sinha made during Infrastructure Investor’s inaugural India roundtable in June, the Fund II portfolio, which comprises 15 investments, could “be morphed into an institutionally owned and professionally managed domestic infrastructure company”.

GIP announced the acquisition of IDFC Alternatives’ infrastructure business in April. At the time, the subsidiary of Bombay-listed financial institution IDFC had said it would continue to manage its private equity and real estate funds, which account for 40 percent of IDFC Alternatives’ $3.4 billion of assets under management.

According to Sinha, a deal to sell those businesses to another alternative investment manager is imminent and will be announced as soon as the transaction is finalised. 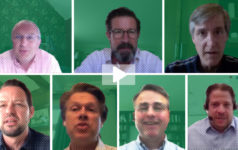 Webcast: The evolving definition of infrastructure as the asset class matures

Fighting racism is on the private markets agenda; let’s keep it...

North America 11 hours ago
Added to your Saved Articles
Loading
Unsave Article
Please confirm you would like to remove this article from your saved articles.
Share with other subscribers
Only logged in subscribers of this site will be able to access the shared article.