This article is sponsored by IFM Investors

With hundreds of the world’s largest businesses and more than 130 countries setting net-zero or carbon neutrality policies, emissions targets are creating challenges and opportunities for infrastructure investors. The targets, together with government policy, may intensify pressure on investors to decarbonise their portfolios and create opportunities to invest in new infrastructure.

To achieve net zero, the entire energy ecosystem will need to undergo a profound transition (see chart opposite), which will require unprecedented levels of new investment in infrastructure. This will require meticulous planning, especially in ensuring energy certainty, and tackling intermittency issues through the continued evolution in the use of transition fuels, batteries and other technologies.

In its Net Zero by 2050 scenario, the International Energy Agency says that by 2030, close to $4 trillion will be needed annually for clean energy infrastructure. While governments are committing increasing amounts to sustainable infrastructure to reach the level of investment required, we believe the private sector has a long-term role to play.

Today, the green infrastructure universe is mainly renewables and the transmission lines required to connect energy supply to meet demand. We believe this infrastructure is a critical pillar and the foundation to achieving a net-zero economy. As demand for these types of assets has risen, the supply of assets and investment opportunities has also seen a notable increase, and is likely to grow further as more countries commit to ambitious emission reduction targets. Moreover, the market is evolving quickly and the energy transition opportunity set continues to expand beyond renewables.

The opportunities we see emerging include:

Competitive asset acquisitions are not the only way to participate in the new project supply, with platform models becoming an increasingly common strategy to generate alpha and achieve higher returns than typical standalone financial investments.

Many existing infrastructure assets are already on their transition journey. Some examples of initiatives at assets that we are involved with include:

Veolia Energia Polska (VEP), heating and steam company, UK/Europe has converted coal units to biomass in the cities of Łódź and Poznań. The conversion has resulted in an annual 10-12 percent emissions reduction for the company, equivalent to 350,000-400,000 metric tonnes of carbon emissions a year.

NSW Ports (Port Kembla), seaport, Australia has signed an agreement with Squadron Energy to construct Australia’s first LNG import terminal at the port, which will help meet the state’s gas needs. As part of the energy transition, with a massive increase in the take-up of renewable energy across the state, significant coal generation retirements are expected. Further discussions are underway with the NSW Government to construct a gas-hydrogen co-fired power station at the port.

Melbourne Airport, Australia has completed a 12 MW solar farm on 19 hectares (47 acres) of airport land. This is the largest behind-the-meter solar farm at any Australian airport, and is expected to generate up to 15 percent of the airport’s annual electricity consumption – enough to power all four passenger terminals.

Transitioning assets rather than divestment

According to some estimates, half of the global infrastructure of 2050 is already built, under construction or being planned, implying that active transition strategies will be necessary to meet carbon reduction targets. We believe that the role of existing infrastructure in a net-zero world is significantly understated. There are, and will continue to be, attractive investment opportunities in transitioning infrastructure assets to generate long-term investment returns. Asset divestment forgoes these long-term investment opportunities and, by not addressing the problem, does not achieve the emissions reductions that are possible through responsible asset stewardship.

Although a necessary task, transitioning infrastructure assets to a net-zero economy is complex and challenging. Decarbonisation pathways are likely to be different for each asset and will depend on many factors, including: the source of the emissions, the level of control the asset has over the emissions, the commercial viability of existing abatement options, technological advances and the prevailing policy and regulatory environment.

Nevertheless, we see real opportunity in repurposing traditional infrastructure for alternative uses in the long-term, and leveraging the extensive operational experience and expertise within those companies to diversify and transform their respective business models. Assets such as seaports and airports may also play a key role by constructing supporting infrastructure that facilitates the transition in hard-to-abate sectors, including global shipping, heavy industry and long-haul aviation.

To achieve global net-zero ambitions, the energy mix for the transport sector is expected to shift over the long term to employing clean and renewable sources of energy. Much focus has been on the electrification of road transport; however, significant efforts are also being made to decarbonise the aviation industry. While new aircraft technologies have a role to play, keeping pace with expected long-term demand for air travel will require additional solutions.

Alternative fuels, including sustainable aviation fuels (SAFs), have been identified as candidates for helping achieve the industry’s climate targets. Part of the broader category of biofuels, SAFs can be safely mixed with conventional jet fuel, use the same supply infrastructure and do not require aircraft adaptation.

The International Air Transport Association (IATA) expected that 100 million litres of SAF would be produced in 2021, with production potentially in the billions of litres by 2025 under optimal conditions and with appropriate policy support. Countries across Europe, for instance, are looking at supportive policy changes with various governments having defined and implemented SAF 2030 mandates to initiate the transition to biofuels, with an EU-wide mandate expected from 2025.

A number of cross-functional coalitions across various countries are also forming to promote the take-up of SAFs, with various airlines announcing commitments as well. British Airways, for example, as part of International Airlines Group has committed to powering 10 percent of flights with SAF by 2030. Ryanair is targeting 12.5 percent over the same timeframe. American Airlines has announced SAF commitments totalling more than 120 million gallons, signalling the integral role SAF will play in its sustainability strategy this decade. Similarly, Australia’s national carrier Qantas recently announced it had signed an agreement to purchase 10 million litres of SAF in 2022 with an option to purchase up to another 10 million litres in 2023 and 2024 for flights from Heathrow Airport. This represents up to 15 percent of its annual fuel use out of London.

Successfully scaling up SAF will require a step change in the level of collaboration between airports, airlines, governments and producers, but doing so has the potential to create wide-ranging, long-term benefits. Manchester Airport Group (MAG) recently announced a partnership with Fulcrum BioEnergy to support the development and delivery of SAF produced at a new waste to fuels bio-refinery. SAF will be delivered to Manchester Airport through an existing pipeline.

The partnership could see up to 10 percent of the fuel used by aircraft at the airport replaced with SAF within five years of the new facility becoming operational. The facility will produce approximately 100 million litres of SAF per year. The fuel produced will have a CO2 footprint at least 70 percent lower than that of its traditional jet fuel equivalent and will be produced from non-recyclable household and commercial wastes. Once blended and certified, the SAF can be used in aircraft without the need for modifications.

The key themes mentioned above – infrastructure asset transition and the transformation of the global energy ecosystem – are undeniably shaping the current infrastructure landscape.

Whilst transition will take time, it is an essential element in building the resilience of infrastructure assets and services, which communities globally rely on every day, and a necessary pathway to the net-zero economy of the future. 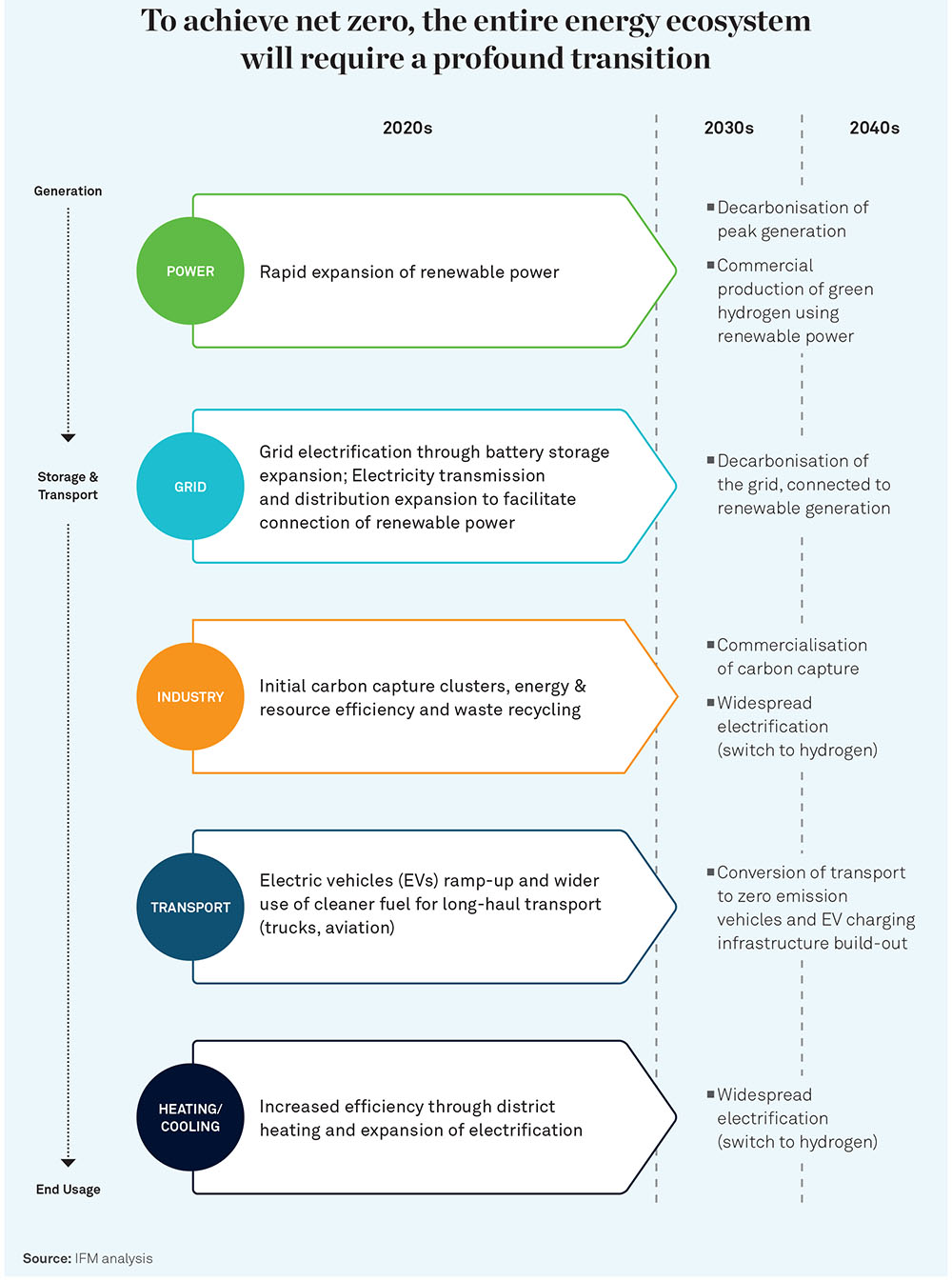