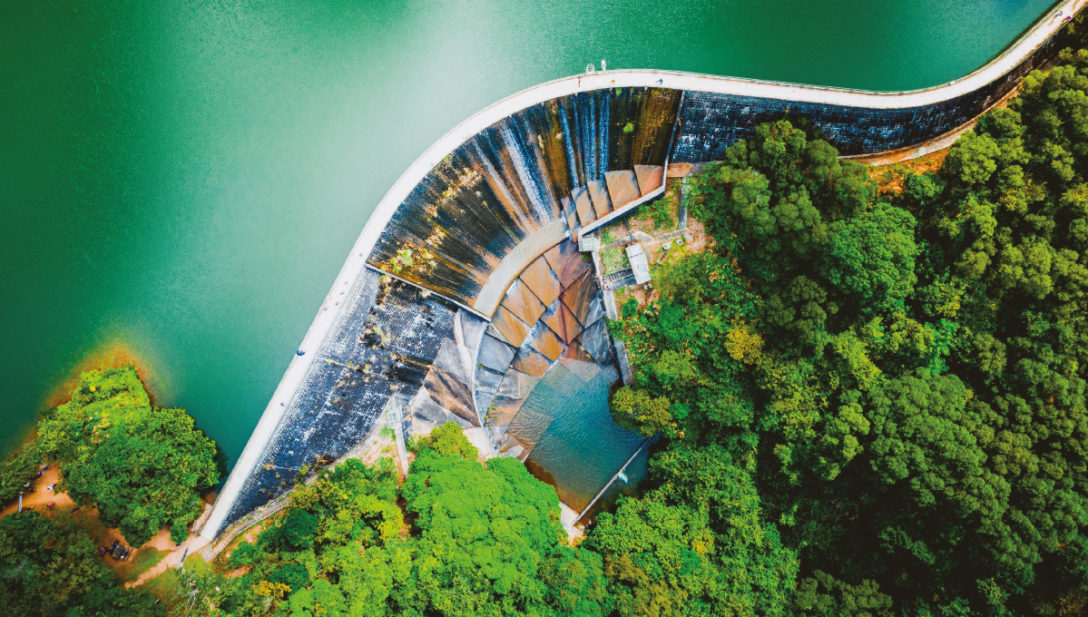 Encompassing everything from the giant markets of China and India, to the established markets of its north and the emerging markets of its southeast, Asia as a region is hard to pin down. However, one thing experts can all agree on is the anticipated growth of its renewables sector.

According to Fitch Solutions’ infrastructure, power and renewables analyst Daine Loh, on top of a broader push towards sustainability across the region, the baseline for the sector’s strong outlook in the decade to come is regulatory support and investor interest across Asia’s many, seemingly disparate, markets. “Across the whole region, we are seeing governments looking to boost their renewables capacity, having more ambitious renewables goals and then setting up very favourable investing environments to drive this renewables growth,” Loh says.

“With the set-up of this favourable environment, Asia becomes very attractive to investors because there’s still a lot of untapped potential here and a lot more room for growth. If you look at the renewable tenders that were being launched in the last few years or so, they are often very oversubscribed, which shows the extent to which investors are interested in the region.

“In terms of how Asia’s renewable energy sector compares to other regions’ renewables sectors, Asia is the largest and fastest-growing region by quite a notable margin.”

Hajir Naghdy, Stonepeak senior managing director and head of the firm’s Global Renewables Fund, agrees. He highlights the targets set by countries such as Japan, where the government’s latest strategic energy plan calls for the share of renewables in the country’s energy mix to go up to 36-38 percent by 2030. This is significantly higher than the previous target of 20-24 percent.

He also cites significant decarbonisation goal setting in Korea, which saw its government pledge to reduce greenhouse gas emissions by a minimum of 40 percent by 2030.

“With the price fluctuations of [REC] certificates, it’s much more difficult to bank on the related revenue stream than the feed-in tariff revenues”

Going hand in hand with ambitious target setting in markets like these, and further ensuring strong growth across the region, is a willingness in many Asian markets to see projects through to meeting those targets, Naghdy says.

“A key factor that’s really positive and encouraging is the level of follow through in implementing these targets, which I think is ultimately the key consideration for us as an investor. We’re seeing the targets translating into real action, which drives fantastic momentum,” he adds.

“Given the universality of the dialogue on climate change and the decarbonisation targets being set in a lot of parts of the world, we see the target setting as something Asia has in common with other regions, and we also see a high degree of follow through in a range of markets. Where Asia is in terms of the journey, or certain markets in Asia are in terms of the journey, there’s lots of growth ahead.”

SUSI Partners managing director Wymen Chan, who leads the firm’s Southeast Asia-focused Asia Energy Transition Fund, says increasing energy demand across the region is another significant factor contributing to the sector’s growth. The fact that renewable energy projects are generally easier to build than traditional energy generation assets is a further boost for the sector in the region, he says.

“The Southeast Asia region is compelling because of its additionality. There’s the need for power so the plants that we are financing or building essentially don’t replace existing plants,” Chan says.

“There’s an opportunity now for Southeast Asia, which is relatively less developed than markets like China, to make this leap towards renewables as the main conventional form of power. There’s a chance to leapfrog, essentially, because it doesn’t have the burden of existing infrastructure.”

The rise of RECs

Likely to play a major role in the growth of Asia’s renewables sector is an increased supply of renewable energy certificates in the region, with Fitch Solutions predicting RECs will contribute to building a strong pipeline of renewables projects across Asia over the next decade. “When more regulators and corporates adopt policies to move towards carbon neutrality, you’re going to need RECs as a form of accounting, which in turn is going to increase the demand for RECs,” Loh explains.

She points out that how much RECs will ultimately cost could end up varying quite widely across the region, as regulators work out the best way to calculate REC allocations going forward. Despite this, as more RECs are tagged to renewable projects, the demand for them will continue to rise.

For the most part, investors agree RECs have an important role to play in carbon mitigation and are likely to give the sector a further boost across the region. However, as adequate standardisation is yet to be implemented, RECs have yet to feature significantly in their investment decisions.

“At this point in time, we don’t consider RECs in our investment process per se. We are certainly aware of it and would like to see it succeed in the market,” Chan says.

“The critical issues facing RECs right now are the certification bodies. There’s no standardisation. There are big steps towards it at the moment, however. Singapore [regulators] recently issued a certification standard for Singapore and a lot of different countries in the region are looking at improving the robustness of the certificates as well.

“These things need to be sorted before you actually have an active market for RECs. For us, we view them purely as a bonus or additional revenue, if it becomes viable. But we are all for the concept of a REC.”

“When more regulators and corporates adopt policies to move towards carbon neutrality, you’re going to need RECs as a form of accounting, which is going to increase the demand for RECs”

According to CDPQ Asia-Pacific infrastructure managing director Cyril Cabanes, a globally standardised and transparent market for RECs will be essential to them playing a more significant role in future investment decisions.

“It’s a commonly accepted view that until we actually get a globally harmonised market for those types of instruments, where there’s transparent valuation and market dynamics, it’s going to be quite difficult to systematically make RECs-related revenues a major contributor to project economics. In the more advanced and liquid markets, they do represent a significant contribution to the overall economics of the project,” Cabanes says.

“However, in general, long-term investors in renewable energy, particularly given how much returns have come down in the last few years, look for certainty. With the price fluctuations of those certificates, it’s much more difficult to bank on the related revenue stream than the feed-in tariff revenues, which are typically locked in for 20 to 25 years and are, in most Asian markets, inflation-linked and therefore a very reliable revenue source to leverage up.

“It’s important, is the short answer, but it’s unevenly important and really depends on the specific market you’re looking at. It could be a lot more meaningful in the overall underwriting of projects, if it was more robust, deep and transparent, and there was a harmonisation of rules from one market to the next.”

Naghdy adds: “You have to take a view on what the use of RECs ends up looking like. It’s a little bit more nuanced in terms of the investment decision, because you’re obviously not only making a call on the value of the REC, but also the relevance or ability to trade those certificates.”

Driving Asia’s renewables growth are the giants of the region, China and India. Despite already being dominant markets, Loh says both still have huge potential for growth. Beyond China and India, she highlights Vietnam and Taiwan as two markets that have seen a strong increase in regulatory support and commitment in recent years.

“You can see that the Vietnamese and Taiwanese governments are doing a lot to support growth in these two markets,” she adds. “At the same time, both markets are relatively open to foreign investments as well, so there are further opportunities there… I would classify them as outperformers.”

North Asian markets such as Taiwan, Japan and Korea, are considered prime investment destinations thanks to regulatory frameworks that complement the renewables sector. However, domestically sourcing supply chains to build renewables such as offshore wind projects can still prove a challenge, even in these more established markets.

Cabanes says: “At the moment, the region has been extensively relying on offshore wind technical competency and capacity that’s been imported over from Europe primarily. It’s transitioning to having a more homegrown industry [but] it’s going to take a while to reach maturity and the point at which one can have all those capabilities sourced domestically. Beyond the question of how strong the market is, how much incentive you have as an investor, and whether this is a good regulatory regime or not, it’s really a question of – can you actually do it?”

“The Southeast Asia region is compelling because of its additionality. There’s the need for power so the plants that we are financing or building essentially don’t replace existing plants”

Not to be left behind, more emerging markets in Southeast Asia are joining the move towards sustainable energy solutions, gradually moving away from a tendency to rely on more traditional energy generation.

“The good news is renewable energy is quickly becoming mainstream and governments in emerging markets like Cambodia, Indonesia, and Laos understand that there’s this push towards renewables,” Chan says.

“There are certainly risks. Development risk is one, as all these assets are new. And regulatory risk, given that not all stakeholders are familiar with renewables. The third risk is financing risk, as local financing banks are also new to renewables as a whole.”

The existence of these risks may sometimes mean emerging markets can be overlooked by larger funds and institutional investors, but Chan says being inclusive of emerging markets in the region will be key to meeting broader climate goals.

“In our push for climate change mitigation, it’s important to be inclusive of the emerging Asian economies,” Chan adds. “I would welcome more competition here because it only improves the sector and improves our chances. Climate change mitigation has to be global. We cannot leave out any particular region or country in order to achieve our climate targets. That’s why we focus on emerging economies in Asia.”