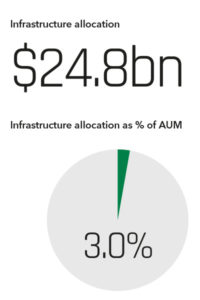 Set up in 1976, Abu Dhabi Investment Authority is the largest sovereign wealth fund established in the Middle East. ADIA has been investing in infrastructure since 2007. It pursues a strategy of acquiring direct minority equity stakes in assets generating strong and stable cashflows across utilities, transport and energy.

ADIA can also invest in funds to complement that strategy. The sovereign wealth fund is a long-term investor and is increasingly alive to climate change, with renewables making up nearly 15 percent of its infrastructure portfolio. 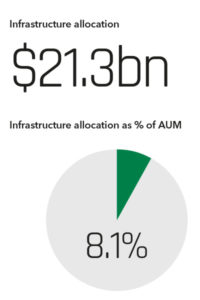 CDPQ was established in 1965 and is one of the world’s premier direct investors in infrastructure, with over 20 years’ experience. Its investments in the asset class span ports, airports, highways, wind farms, public transit systems, and energy transportation and distribution networks.

Over 76 percent of its portfolio is located in OECD countries – with the US scoring the highest single country exposure – and growth markets comprising the rest. Through its subsidiary CDPQ Infra, the Canadian pension is one of the few direct investors in the world with the capacity to plan, finance, build and own large-scale infrastructure projects. 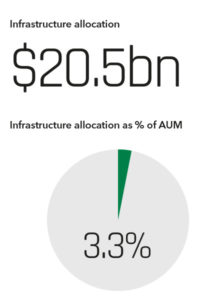 Founded in 1998, AllianzGI is one of the main asset-management units of the 125-year-old financial services provider Allianz SE. The firm started investing in infrastructure in 2005, and is now invested across the capital stack, including debt and equity, with a significant exposure to renewables equity. In 2018, the addition of Allianz Capital Partners, which had been investing in infrastructure mostly on behalf of Allianz insurers, bolstered its portfolio. On the debt side, AllianzGI has invested across Europe and the US in public-private partnerships, utilities and renewables, focusing on senior, investment-grade securities. On the equity side, its focus has been primarily on renewable energy, although it also invests in other sectors. 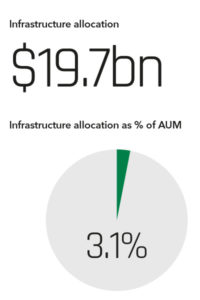 Established in 1988, NPS is one of the largest pension funds in the world.

It aims to invest 3.3 percent of its total AUM in infrastructure this year, focusing on renewables, midstream and transportation with a stable, long-term internal rate of return. NPS said in June it would increase investment in alternative assets including infrastructure.

Also, in light of unexpected events, like covid-19, it will focus on ESG to raise return rates and manage downside risks. 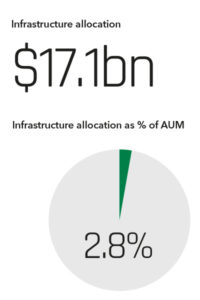 Serving roughly 4.7 million beneficiaries and with €538 billion in assets under management, APG is the largest pension administrator in the Netherlands and one of the largest in the world. The Amsterdam-based organisation has been investing in infrastructure since 2004. As at the end of 2019, it had invested roughly €14 billion in assets across the energy, utilities, telecommunications and transportation sectors.

It also holds direct stakes in 32 portfolio companies – one of them being Brussels Airport, in which APG, along with Australia’s QIC and Swiss Life acquired a 36 percent stake last December. The administrator plans to further pursue direct investments in infrastructure to cut costs and boost returns, per its 2019 annual report. 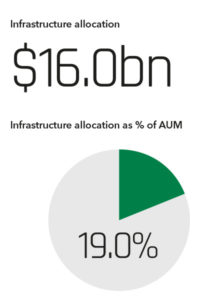 OMERS is one of Canada’s largest defined-benefit pension funds. Active since 1962, the fund counts 1,000 participating employers ranging from large cities to local agencies. One of the early birds in the asset class, OMERS has more than 20 years’ direct investing experience across sectors including energy, transportation, water and telecoms, among others.

It has also dipped its toes into managing third-party money with the pioneering Global Strategic Investment Alliance, a co-investment programme featuring some of the world’s largest institutions. 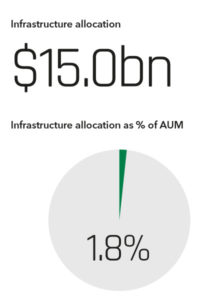 Established in 2007, the China Investment Corporation is a sovereign wealth fund responsible for managing part of the country’s foreign exchange reserves. With 44.1 percent of its total portfolio allocated to alternatives, the SWF is close to reaching the 45 percent target it has set for the asset class by 2021. Within alternatives, infrastructure accounts for roughly 4 percent, exceeding $15 billion.

Last year, CIC told Infrastructure Investor that its infrastructure portfolio was equally split between fund investments and direct investments, the latter made through CIC Capital and which the SWF aims to increase as a percentage of its portfolio in order to boost returns. 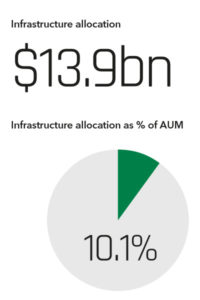 BCI invests directly and through fund managers, with the majority of its portfolio in the US, followed by emerging markets, Europe, Canada and Asia. 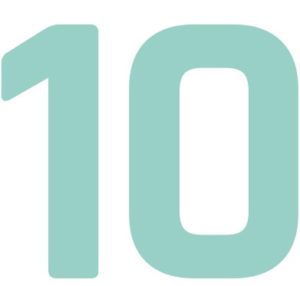 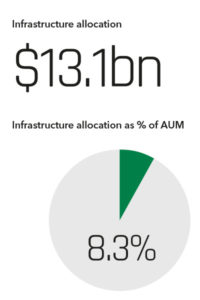 Established in 1990, OTPP is Canada’s largest single-profession pension plan. It is also one of the premier direct investors in infrastructure, having started committing to the asset class in the early noughties. It seeks to make control investments and has 63 percent of its portfolio in transportation and logistics, 20 percent in energy, 15 percent in water and wastewater treatment and 2 percent in other assets. OTPP’s investments are mostly located in Europe, Chile, the US, Canada and Australia, although it made its first Asian investment last year. Following a strategic review in 2015, OTPP also started investing in greenfield infrastructure.