Municipal Fire & Police Retirement System of Iowa has decided to cut infrastructure from its investment portfolio despite introducing the asset class to its offering just last year, according to the pension’s January 2020 investment flash report.

MFPRSI debuted its infrastructure portfolio in August 2019, with commitments swiftly made to the open-ended vehicles JPMorgan Infrastructure Investments Fund and IFM Global Infrastructure Partners. Just five months later however, the pension has decided to waive its allocation to infrastructure in favour of boosting its exposure to public equity and fixed income investments.

As illustrated below, MFPRSI’s target allocations were revamped in October 2019, with alternative asset classes allotted 33 percent of the pension’s portfolio. Core infrastructure was granted five percent; core real estate eight percent and private equity 20 percent. No decisions to adjust allocations to real estate or private equity were disclosed in the aforementioned flash report. 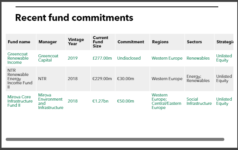 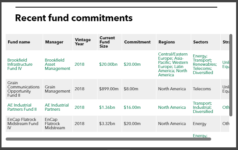 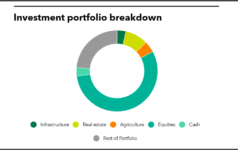 opinion 23 hours ago
Added to your Saved Articles
Loading
Unsave Article
Please confirm you would like to remove this article from your saved articles.
Share with other subscribers
Only logged in subscribers of this site will be able to access the shared article.