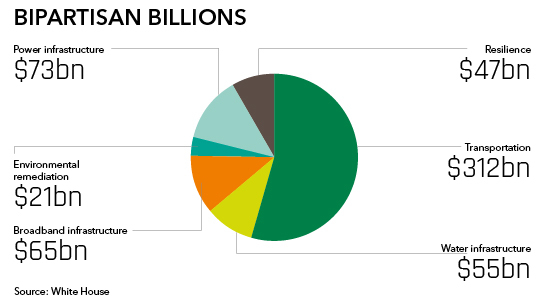 There’s a bipartisan US infra plan at last… or is there?
The US may be on the verge of a transformative infrastructure spend after President Biden agreed a Bipartisan Infrastructure Framework with US lawmakers to plough $1.2 trillion into rebuilding the nation’s infrastructure, with $579 billion (spend detailed above, plus $5 billion for Western Water Storage) of new money, with the remainder from unused coronavirus relief funds and returned state jobless benefits. The bulk is heading to transportation with roads and bridges ($109 billion), rail ($66 billion) and public transit ($49 billion) the main beneficiaries. Here’s three key takeaways from the framework:

Biden, however, has linked the passing of the framework to the passing of a $6 trillion budget reconciliation bill, infuriating Republicans shortly after the announcement, though the president seems to have made amends over the weekend.

‘Pain Pain Pain’
Less enamoured with PPPs is Eastpoint Partners chairman John Walker, who didn’t mince words during the Asia Keynote session at Infrastructure Investor’s Global Investor Offsite last week. While sharing his insights on the outlook for driving infrastructure development across the region post-pandemic, Walker – who recently retired as chairman of Macquarie Capital Asia and Macquarie Group Korea, after 22 years at the firm – likened PPPs to a world of pain.

Highlighting a need for governments and regulators in the region to keep up with technological advancements and the rapidly changing nature of the infrastructure asset class, he said: “The meaning of PPP is going to have to move away from Pain Pain Pain to be something of a genuine sort of relationship between policymakers and regulators, technologists and investors.”

This would also help solve the “technological bottleneck” slowing down infrastructure development, as the asset class otherwise picks up momentum post-pandemic, he added.

Who will stop tower prices rising higher?
Elsewhere at the Global Offsite, panellists discussed whether digital infrastructure’s reality was living up to the hype. When it came to valuations, DigitalBridge’s Steven Sonnenstein had some forthright views.

“I think it’s really exciting that people are willing to pay over 30x for a towerco. I think we should sell all of our tower assets at 30x,” he said dryly, before issuing a note of caution to the industry.

“We’re trying to maintain a disciplined approach to deploying our capital. The multiples have gotten away from a lot of us across the board. We’re all stewards of other people’s capital and we need to invest them for a promised return. Ultimately, the real question we need to ask ourselves is who the next buyers of these assets are? If somebody is buying an asset at 30x, what multiple do they need to sell it at to achieve their targeted returns? Is it 35 or 40? These are the questions we should all ask ourselves.”

Sunny days for renewables funds
In the other highly coveted sector, NextEnergy Capital inched closer to its $750 million target for NextPower III, the world’s first international solar fund, after it raised a further $232 million, bringing the total capital gathered to $530 million. New commitments came from German investment firm Derigo, an unnamed German pension fund and $50 million from the listed NextEnergy Solar Fund. NextPower III, which targets gross returns of 13-15 percent, has secured deals in countries including Portugal, India and the US. The fund is open for fundraising until the end of the year.

As NextPower edges towards close, Spain’s Arcano Asset Management has reopened its coffers with the launch of its second renewables fund of funds, Arcano Earth Fund II. The successor is targeting €300 million, the final size of the group’s maiden effort, which closed in November last year.

“You don’t want to lock in technology which is wrong for the next 20 years, but you also don’t want to sacrifice the good on the altar of the perfect, waiting for a 20-year solution.”

Jonathan Maxwell, chief executive of Sustainable Development Capital, at our Global Offsite, on the need to eke out the most from today’s renewable technologies

Macquarie Capital loses senior exec
After 15 years at Macquarie Capital, managing director Elise Vaudour has departed from her role as global head of private capital markets to begin a new position with a French fund manager in September, The Pipeline has learnt.

Vaudour, who joined in 2006 from ABN Amro, led the unit’s infrastructure energy efforts in France. She has experience in transactions totalling about £10 billion ($13.9 billion; €11.6 billion) in project development financing, equity investment alongside infrastructure funds and corporates. She also raised over £12 billion from commercial banks, institutional investors and multilaterals across these deals.

Macquarie declined to comment on Vaudour’s departure or a potential replacement.

OTPP doubles down on infra
Ontario Teachers’ Pension Plan is seeing “a healthy level of competition” for core infrastructure, an area it is “very much focused” on as it seeks to double its infrastructure investments in the next five years, Dale Burgess, senior managing director of infrastructure and natural resources told Bloomberg (paywall) in a recent interview.

As of 31 December, the Canadian pension’s infrastructure portfolio amounted to C$17.8 billion ($14.5 billion; €12.1 billion), accounting for roughly 8 percent of its total AUM. It aims to more than double that figure to C$40 billion over the next five years, Burgess said. 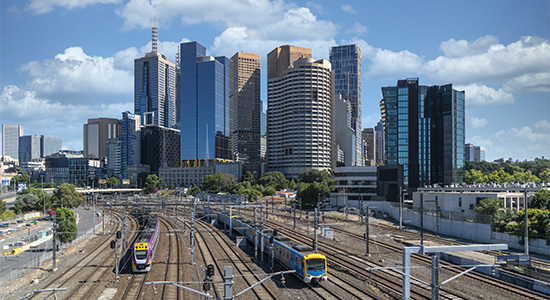 The PPP involving the construction of twin three-lane tunnels and key interchanges was described by the government as an “important step” for the A$15.8 billion ($12 billion; €10 billion) North East Link project. Jointly funded by the federal and Victorian governments, the wider PPP project is expected to “fix the missing link in Melbourne’s freeway network”.

The tunnelling package is on track to be awarded before the end of the year, at which point “the project will go out to market for other key elements of North East Link”, the government said.