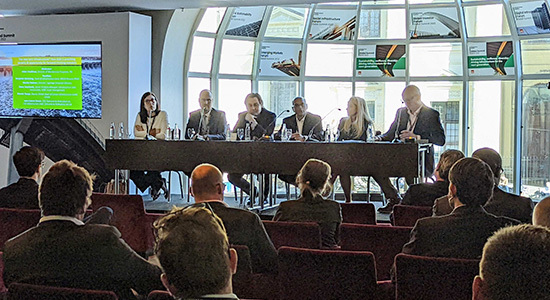 Mind your greenfield exposures
It’s difficult not to have Russia’s war on Ukraine front of mind these days, so it was perhaps unsurprising to find infrastructure debt investors are worried about the conflict’s impact.

“We’ve had two events: covid and now Ukraine. Covid was almost half an event from a business standpoint,” Jean-Francis Dusch, CEO of Edmond de Rothschild UK and CIO for infrastructure debt, told attendees at our Infrastructure Debt Forum. “It didn’t hit us for too long and it didn’t have a major impact on infrastructure, even accounting for harder-hit sectors like transportation. Ukraine is different. For the time being, there is an impact, particularly for greenfield projects, because of the scarcity of materials, so that’s where we might have to adapt a bit.”

Benjamin Hemming, head of infrastructure debt at MEAG Munich ERGO, agreed. “The effects of inflation are a worry with greenfield and exposure to rising commodity prices. As a result, counterparty risk also rises, and you have to worry whether your partners have financial stability to deal with this thing,” he said.

It’s not all bad news though. As Dusch rightly pointed out: “It looks like we may have cost control and supply [chain] issues in building new infrastructure. But at the same time, this situation accelerates the need for greenfield.”

Is nuclear on the agenda?
This week saw the finance folks behind the UK’s Sizewell C project lay out their store to try to attract private investment.

Stephen Vaughan, vice chair of energy and power at Rothschild, which is financial adviser to Sizewell C, said the total “private ask is £3 billion ($3.9 billion; €3.6 billion) [of equity] and debt upwards – and potentially well upwards – of £15 billion.”

Well, Stephen, we’d like to introduce you to Scottish Widows’ Adil Jiwa, director of infrastructure debt.

“In the UK specifically, there’s been in the last three or four years a lack of…mega-debt investment opportunities,” he told attendees at our Infrastructure Debt Forum. “Clearly, going forward, that’s likely to change, with Sizewell C coming online. From a debt perspective, we certainly are monitoring the situation, and will certainly look at the options. We would potentially look at it, subject to meeting our criteria, and ESG is one of those.”

Macky Tall, partner and chair of The Carlyle Group‘s infrastructure group, was slightly cooler on the issue in Tuesday’s keynote interview, believing the “nuclear issue is more of a political decision than a private sector one now”.

No fusion between him and Jiwa, then.

Pricing the digital future
After a day of panellists waxing lyrical about fibre and data centre investments, the final session of our Digital Infrastructure Forum brought the conversation back to mounting concerns about valuations in the sector. It was a measured and balanced conversation, although Oliver Bradley, managing director for digital infrastructure at Macquarie Capital, was unimpressed by some of what he’s seen in the market.

“It’s not that cost of capital is going down, per se, it’s that discount rate applied to a given business plan risk is what has gone down,” he said. “People are kidding themselves that some business plans are a double-digit business plan. It’s a bit subjective. I think the last time in my career I saw that kind of thing happen was 2007. Who knows what happened next?” he jokingly asked. But only slightly in jest, he added.

Maybe there’s still a history lesson there for some.

Hydrogen’s hurdles
A slow-moving policy framework in the EU may be a significant barrier to hydrogen becoming a major player in speeding up the energy transition in Europe. But it’s not the only thing standing in the way.

Citing the UK’s strong policy environment for hydrogen as an example, Ikigai Capital’s chief operating officer, Helena Anderson, told attendees at our Energy Transition Forum that even a favourable policy framework wouldn’t be enough to see hydrogen play a more impactful role in the years to come.

One of the hurdles to hydrogen being delivered and imported at a huge scale, Anderson argued, is a lack of cohesiveness along the hydrogen supply chain, as well as inadequate infrastructure.

Anderson, the former head of energy capital investment at the UK government, added: “It’s an incredibly complex issue, but I don’t think you can just [expect] politicians to solve the problem. There’s a lot that… needs to be done in the supply chain and in the infrastructure world to be ready for an entirely new eco-system with hydrogen.”

PEI Media is raising money for UNICEF in an initiative launched at the Infrastructure Investor Global Summit in Berlin.

More than seven million children in Ukraine are at risk as the conflict escalates. With explosions in major cities across the country and thousands of families being forced to flee their homes, UNICEF is calling for an immediate ceasefire.

More than three million people have now fled Ukraine, with the number expected to climb to five million. UNICEF is working around the clock to keep families safe.