The UK has responded to the energy crisis by fast-tracking plans to decarbonise its electricity generation by 2050, bringing it forward to 2035. The plan, matching a similar pledge by the US this year, will look to reduce the reliance on importing fossil fuels and build out more offshore wind, hydrogen, solar, nuclear, onshore wind, and carbon capture and storage, a government statement said.

Although the plan is ambitious, one industry source told The Pipeline: “It’s great as an objective, but there’s nothing there in terms of how you get there. The roadmap to deliver that is really hard and is going to need some pretty serious policy change to have any chance of delivering that.”

Once that is laid out, a reward will be in store for those willing to help, with The Times reporting last week (paywall) that asset managers wishing to build out the UK’s infrastructure will be treated to a “roundtable summit” with Prime Minister Boris Johnson next month. Don’t all rush at once.

Africa50, an investment platform created by African states to invest in infrastructure and based in Casablanca, is launching a new fund and has tapped Vincent Le Guennou to lead the effort.

According to a statement, the fund will operate independently, but is also expected to explore co-investment opportunities with Africa50, leveraging the platform’s “capabilities in key areas such as deal flow generation, project development and project financing”.

Le Guennou, who will serve as the fund’s chief executive, has extensive private equity experience. He is a founding partner and serves as co-chief executive of Emerging Capital Partners, a private equity firm headquartered in Côte d’Ivoire, focused exclusively on Africa.

He will be “joined by a team of highly skilled executives and professionals”, Africa50 added, without specifying the number or names of those joining.

As a growing number of GPs pivot to impact strategies, La Banque Postale Asset Management has launched its maiden impact infrastructure debt fund, which aims to combat climate change and its impacts.

With a target size of €400 million, the LBPAM Infrastructure Debt Climate Impact Fund will target senior debt investments in projects across the renewable energy, electric transport and energy-efficiency sectors in continental Europe.

According to a statement, the fund’s impact measurement will be based on three indicators: the “green share” – the percentage of alignment of each asset and portfolio with the EU Taxonomy – carbon footprint and temperature alignment.

The new strategy is expected to draw on the expertise of the firm’s €3.5 billion Real and Private Assets platform and will be led by LBPAM’s infrastructure private debt team, which to date has invested close to €1 billion in energy transition projects in Europe.

Speaking of firsts, fellow French manager RGreen Invest is also launching its debut impact debt fund. The firm will be doubling down on ‘impact’ by targeting African renewables projects producing less than 10MW – not exactly a burgeoning market.

“Afrigreen is a fund specifically designed to support projects that fail to attract traditional investors due to their size,” acknowledged renewable energy specialist Olivier Leruste.

Afrigreen is targeting €100 million, with a first close earmarked for the end of January. The fund will focus exclusively on providing senior debt, aiming to create a diversified portfolio of 20 to 30 investments across West and Central Africa with an average ticket of €4 million. It will privilege solar plus battery storage investments in the commercial and industrial sectors.

The fund will have “impact targets matching the UN Sustainable Development Goals”, RGreen said, and is part of a new push by the firm to bolster the ESG credentials of its vehicles – including Infragreen V, which is due to launch in early 2022. 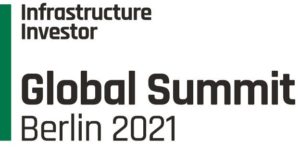 Join the Global Summit in Berlin!

The Infrastructure Investor Global Summit – the industry’s premier event – is returning to the halls of the Berlin Hilton on 18-21 October. That’s in-person – yes, you are reading that right – as well as virtually.

More than 1,000 delegates will congregate at the Hilton across seven specialist forums, including the new Social Infrastructure Forum, for four days of networking and setting the post-covid infrastructure investment agenda. Expect engaging discussions and interviews with some of the asset class’s biggest names, including Global Infrastructure Partners chairman and managing partner Adebayo Ogunlesi, and Sadek Wahba, chairman and managing partner of I Squared Capital.

So, what are you waiting for? Book your ticket and join us in Berlin!

“It’s bollocks… Everyone wants to talk about the transition fuel – maybe a 20 percent hydrogen mix in our gas supplies… It would only reduce the carbon emissions of gas by 6-8 percent because of the lower energy density, [and] it would put bills up dramatically, because hydrogen is a lot more expensive”

Greg Jackson, chief executive of Octopus Energy, told the New Statesman of his slight scepticism around hydrogen’s role in the energy mix

Infranode may well have raised the Nordic region’s largest infrastructure fund in June with the €1.2 billion close of Infranode II, but its ambitions have not stopped there. The Swedish investment manager has hired Silas Harbo to lead its new office in Copenhagen, adding to its existing offices in Stockholm, Helsinki and Oslo.

Harbo joins from Nykredit, where he was director for energy and infrastructure advisory and where, according to Infranode, he worked with Danish energy and utility companies, Danish pension funds and international infrastructure investors. With deals such as Vandel 3, the largest solar park in the Nordics, and a partnership with the Danish port in Ejsberg, Infranode already has a presence in Denmark. However, the bulk of its Nordics-based LPs for Infranode II came from outside Denmark, a country with a substantial number of infrastructure-hungry investors. So, plenty of opportunity for Harbo.

Energy Transition Fund I reached a first close of €800 million in June, on its way to a target of €2.25 billion, with a final close expected in late Q2 of next year. The fund will invest in industrial scale Power-to-X projects – projects that convert surplus electrical power into other energy sources. A NZ Super statement said the vehicle had made five investments – in Denmark, Sweden, Spain, Norway and Australia – and has an “advanced pipeline” of a further seven.

The superannuation fund backed CIP because of the company’s track record in the clean energy space and is “looking to increase exposure to infrastructure both internationally and domestically”, NZ Super’s CIO Stephen Gilmore said in the statement.

With the COP26 conference in Glasgow fast approaching, there are still a range of opinions on the role gas should play as a transition fuel on the road to net-zero emissions.

Plenty of infrastructure investors remain confident about the sector’s prospects, though, with the latest affirmation coming from Stonepeak’s acquisition of NYSE-listed Teekay LNG in a $6.2 billion deal. Teekay LNG is one of the world’s largest owners and operators of liquefied natural gas carriers.

James Wyper, senior managing director at Stonepeak, said in a statement that the transaction aligned with the firm’s recognition of natural gas as “a bridge fuel, particularly as the world continues to shift toward cleaner sources of energy”.

He added that Teekay would “bring cheaper, cleaner, more reliable energy supply to all parts of the world, especially in Asia where we have been active investors in the ongoing shift to cleaner fuels and renewables,” thereby building on the firm’s new focus on that region.