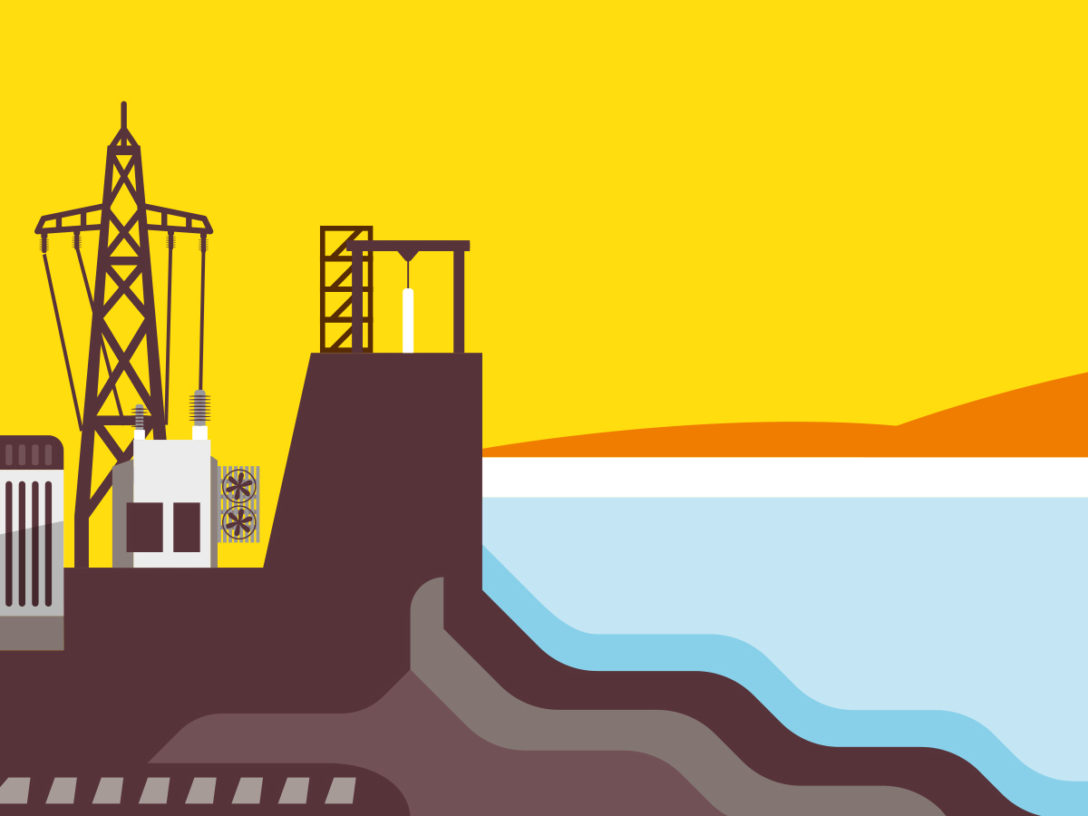 The energy transition depends not only on generating green power, but on moving it from wind farms, hydro facilities or solar plants into homes and factories. In Africa, however, the relative dearth of transmission infrastructure is a key impediment to connecting consumers to electricity of any sort, including new forms of renewable generation. The World Bank estimates that Africa needs to invest at least $3.2 billion a year up to 2040 in its transmission network.

There is no shortage of projects and schemes that aim to strengthen transmission on the continent, some of which even envision supplying African energy to Europe. But investors seeking to harness the immense power of Africa’s renewable resources must overcome multiple regulatory, logistical and financial hurdles in the transmission space before their dreams can become reality.

Cross-border transmission in Africa “has been happening for decades and quite successfully”, says Koffi Klousseh, managing director and head of project development at Africa50, an infrastructure investment platform established by the African Development Bank.

South Africa, for instance, first benefitted from hydroelectric power generated in Mozambique and transported via a high-voltage, direct current transmission line in the 1970s.

With a renewed focus on expanding generation capacity, many countries in Africa “may end up having capacity they cannot use”, says Klousseh, meaning there is “greater interest in ensuring that interconnections are in place to wheel surplus to areas experiencing power deficits”.

A particularly ambitious scheme to supply surplus energy from Africa to Europe is being advanced by UK-based company Xlinks. The start-up aims to generate 3.5GW from onshore wind and 7GW from solar PV in Morocco. Power would then be exported to the UK via the world’s longest subsea HVDC cable.

“First-mover projects will always, especially in emerging markets, require a lot of security and support and credit enhancement to make them work”

Richard Hardy, a senior project developer at Xlinks, says: “The technology is advancing at such a pace that it makes sense for transmission systems to become longer and longer and connect a broader variety of different markets.”

Hardy acknowledges that the scheme faces logistical difficulties in sourcing the required materials to manufacture the subsea cable. And although there are unanswered questions over the financing arrangements, Hardy insists that “sustainable energy projects that have been developed in the right way are highly attractive to investors at the moment – there is a lot of capital looking to be deployed in this area”.

Norman Waite, an energy finance analyst at the Institute for Energy Economics and Financial Analysis, agrees that intercontinental transmission schemes are “realistic from a technology standpoint”. In fact, Morocco already exports solar energy to nearby Spain via a 50km transmission line.

However, Waite cautions that an undersea cable can cost 10 times as much as an above-ground line. Although he believes Saharan solar is eventually “likely to yield energy costs so low they justify the expense”, he says larger-scale exports of power to Europe “might be some time away”, given the technical and financial challenges.

Another scheme with monumental ambitions is the latest stage of the Democratic Republic of Congo’s Inga hydroelectric project, known as Inga III, which aims to generate up to 11GW from the Congo River.

South Africa controversially agreed to purchase 2.5GW of electricity from Inga III in 2013. But connecting the unbuilt mega-project to South African consumers is set to pose an enormous challenge.

“Conservative estimates put the cost of transmission lines from Inga III to South Africa at upwards of $4 billion,” says Indigo Ellis, associate director at Africa Matters, a strategic advisory firm. Ellis doubts the capacity of Eskom, the troubled South African utility, to fulfil its promise to pay for the 2,000km of transmission lines needed for the project. She points out that Eskom “is in dire financial straits and is unable to finance much-needed repairs of its own dilapidated and ill-constructed power stations”.

Any prospect of attracting investors to support the financing of the project are hamstrung by social and environmental concerns around the dam itself. “Community resettlement around the project has been a thorny issue,” says Ellis, and the need to uproot as many as 37,000 people is “liable to dissuade ESG-minded investors” from funding the project.

The urgency of strengthening the power sector, including the transmission network, is illustrated by the fact that only around half of people in sub-Saharan Africa have access to electricity and supply is often unreliable for those who do have a grid connection. Africa also has the highest transmission and distribution losses of any region, with an average power loss of 23 percent.

Even Ghana, one of the continent’s most successful economies, has endured a dysfunctional power market for many years, with nationwide blackouts in early 2021 blamed on GRIDCo, the national transmission company. Yet financing improvements to the grid appears to be beyond the government, which accrued a fiscal deficit amounting to almost
14 percent of GDP in 2020.

“There isn’t the fiscal space to invest hundreds of millions, or billions of dollars, in transmission networks,” notes Kobi Annan, a consultant at Songhai Advisory, based in the Ghanaian capital Accra.

“The grid is a state-owned asset,” says Felix Ndi-Obiosa, of counsel for Africa at law firm DLA Piper. “African leaders are wary of effectively giving up control over a national asset to foreign players – there’s a lot of sensitivity around that.”

Klousseh adds that the role of vertically integrated utilities, which still dominate the power sector in most countries in sub-Saharan Africa, “limit financing for transmission to governments, development finance institutions and export credit agencies”.

And allowing private sector participation in the electricity value chain in Africa has not always gone to plan. Ghana’s recent experiment with privatising the electricity distribution network ended in fiasco, with a concession awarded in March 2019 but then withdrawn months later over a contractual dispute.

Kenya has become the first country in sub-Saharan Africa to introduce reforms to facilitate the IPT model. Although the Kenyan government has yet to finalise any concessions, Klousseh says Africa50 is pursuing a project with Indian utility Powergrid to take over three transmission lines in the country. “Using an innovative PPP structure, we hope it may set a precedent for IPTs in Africa,” he says.

Torbjorn Caesar, senior partner at Actis, is certainly enthusiastic about the opportunities that may eventually materialise for long-term infrastructure investors to finance transmission lines in Africa. Citing the success of several other emerging market countries that have privatised transmission, Caesar insists that “the risk is very, very low” for investors in transmission networks, particularly in countries with burgeoning demand for electricity.

“To deliver something that is in short supply is, in general, a lower risk than delivering a product that is in oversupply,” he says. In countries such as Kenya, Caesar believes, “the perceived risk is higher than the actual risk”.

Meanwhile, Isaac Otolo, a director at PwC in Kenya, says the country’s success with independent power producers generating wind and solar power can provide a blueprint for IPT investors. He believes the key step for the transmission sector will be finding an anchor investor.

“First-mover projects will always, especially in emerging markets, require a lot of security and support and credit enhancement to make them work,” he says. “The first investors need to be brave and take the plunge.”

“India is a success story,” says Norman Waite, an energy finance analyst at the Institute for Energy Economics and Financial Analysis, noting that since reforms introduced in 2006, “private sector participation has helped modernise the grid and thereby increase the uptake of renewable energy”.

Harsh Shah, chief executive of IndiGrid, a KKR-backed transmission company operating in the country, adds that “at the end of the day, transmission costs are very minuscule for customers”.

According to Shah, India’s ability to attract sustained investment in transmission infrastructure is down to the fact “the regulatory framework has been robust and stable”. Service agreements are standardised across the country and there is a clear policy favouring competitive bidding on all transmission auctions.

The mechanisms to ensure payment security have been crucial to the success of the IPT model in India. Revenue paid to inter-state transmission line owners from generating stations is pulled into a single account and shared pro rata with the transmission companies. Shah says this model “diversifies the customer base so much that the impact of a payment delay goes materially down for any transmission line owner”.

As one of the world’s largest electricity markets, India has powerful advantages in terms of being able to diversify risk for transmission operators. Moreover, it can draw on well-capitalised domestic conglomerates eager to enter the sector. Waite says: “India provides a globally relevant model for other emerging markets to drive down cost while creating a more sustainable domestic electricity generation system.”

Shah agrees, but notes there is room for improvement in how India manages its electricity sector, particularly as it is much quicker and easier to add generating capacity from new solar plants than it is to construct the necessary transmission infrastructure. “India has been planning reactively,” he says. “One of the things that India can do better is ensure that we build capacity proactively, keeping in mind the requirements of the new grid.”