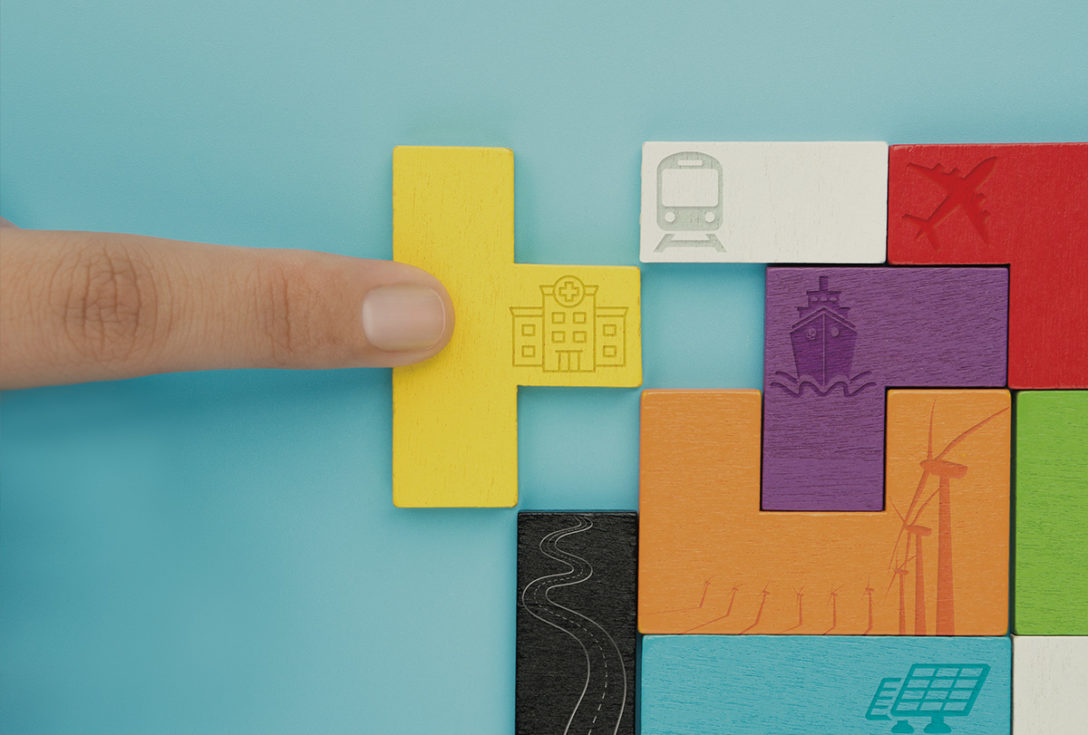 Social infrastructure has had a turbulent relationship with the investment community it seeks to attract. When public-private partnerships were in their pomp, investors poured money into schools, hospitals, government buildings and courthouses across Europe, Australia and, in a limited fashion, North America. In the UK, for example, such projects made up more than half of the 716 projects procured under the private finance initiative.

Yet when PPPs began to fall out of favour, so did the wider social infrastructure sector. It became, as advisor Georg Inderst coins it to us, the “Cinderella” of the asset class. A shortfall in supply of the assets, combined with their relatively low ticket sizes, meant social infrastructure sat in an awkward position following the demise of PPPs in Europe and the difficulties of the model in the US.

However, this simply meant the need kept growing. In the EU alone, there are estimated investment gaps up to 2040 of €477 billion and €509 billion in healthcare and education respectively, according to a 2018 study by the European Investment Bank. Europe’s own infrastructure schemes do not help with this shortfall either, according to Inderst, who this year released a study, Social Infrastructure Finance and Institutional Investors.

“Much of the emphasis of the Juncker Plan has been on economic infrastructure,” he says, referring to the European Commission’s Investment Plan for Europe, originally announced in 2014 by the EC’s then president, Jean-Claude Juncker. “There has been relatively little support for the social infrastructure sector.”

Since then, infrastructure investors have begun stepping into the breach and Cinderella has been going to the ball again. Healthcare, in particular, has been a sub-sector of favour, with the likes of AMP Capital’s 2018-vintage Global Infrastructure Fund II acquiring UK-based specialist care provider The Regard Group and learning disability provider CMG, which have merged to become Achieve together. Some have headed in an even more specialist direction, with DWS last month acquiring Medipass, a cancer care and advanced diagnostic imaging services provider.

In the education sub-sector, Antin Infrastructure Partners has invested in special needs institutions, and both the French manager and Whitehelm Capital have poured money into pre-school facilities. In addition, social and affordable housing, concert halls and sport facilities have all entered the social infrastructure fray.

The arrival of a pandemic and economic downturn have placed increased attention on these assets. The UK’s £7.6 billion ($9.7 billion; €8.2 billion) Lancashire County Council Pension Fund last month noted “a shift in capital deployment towards more defensive, less cyclical assets such as telecoms and social infrastructure”. Also last month, consultant Hymans Robertson said in a report for the Suffolk Pension Fund that “less economically sensitive sectors such as utilities and social infrastructure [are] likely to remain in high demand as they provide essential services”.

“It is like a sporting facility,” head of real assets Lennart Blecher told us in June. “A modern city has to provide for its population in order to stay attractive – with amusement parks, sports facilities and recreation parks. Our definition of infrastructure includes recreational infrastructure.”

“There’s a lot of crossover between these asset classes. You can have normal real estate funds spreading into health and education”

Of course, that view is dependent on also viewing the likes of concert halls and sports facilities as infrastructure. The latter were among the many types of assets namechecked by Italian fund manager Azimut in January when it launched its Infrastructure for Growth-ESG fund, which is targeting €1 billion for social infrastructure assets in its home country.

“We have great diversification and this lowers the risk,” says Andrea Cornetti, chief executive of real estate and infrastructure at Azimut. “The world is changing rapidly. There is always the risk of investing in a single asset class, such as those investing only in hotels or commercial real estate, and they have now suffered.”

Unless guaranteed on an availability basis by a PPP or a PPP-style contract, the essential nature – and with that, the secure, long-term cashflows – of some of these assets and their role within the infrastructure space can be called into question, or at least discussed. Helpfully though, some have sought to codify this.

However, having these assets defined as essential does not make them the exclusive targets of infrastructure funds. Private equity and real estate funds have flowed into social infrastructure in recent years, with healthcare investments reaching a peak in 2019 of $78.9 billion, according to Bain & Company.

“I call it alternative real estate,” says Inderst. “There’s a lot of crossover between these asset classes. You can have normal real estate funds spreading into health and education.”

The issue is of little importance to Raymond Jacobs, managing director at Franklin Templeton Investments, which has been raising an open-end social infrastructure fund since 2018. Templeton says the investor base is mixed, with some LPs defining it as real estate and others classifying it as infrastructure.

There are those who insist that the long-term outlook of infrastructure funds is far better suited to assets where people’s health and wellbeing are at stake. Harrison Street, the $24.6 billion Chicago-based real estate fund manager, last year expanded its horizons from its traditional real estate funds to launch Harrison Street Social Infrastructure, an open-ended fund targeting the North American market.

“We wanted to be able to work with these groups, whether it is universities, health systems, municipalities and/or local governments, and to show that we are a very long-term, committed partner. Our contracts are often two decades long,” says Christopher Merrill, co-founder and chief executive of Harrison Street.

Jacobs expresses a similar outlook for the open-ended nature of Franklin Templeton’s fund, and emphasises the vehicle’s environmental, social and governance elements.

“Since it is an impact strategy, one of the contributions on the impact side is that our capital investment should be aligned long term with the social services which are being provided in these buildings,” he says. “We also understand that some of our investors need liquidity, so the combination of the long-term approach and the liquidity component led us to an open-ended structure for the fund.” This long-term view is also espoused by Tom
Florence, chief executive of 361 Capital. The Denver-based firm manages the 361 Social Infrastructure Fund, which provides debt to social infrastructure assets.

“These are 15- to 20-year contracts,” says Florence. “The underwriting of the credit of these organisations in the social infrastructure world has never been more important.”

Powered by pandemic
Florence, of course, is speaking in the context of the coronavirus pandemic. As evidenced by the Lancashire- and Suffolk-based LPs, covid-19 has brought an additional focus on the need for social infrastructure. “We thought the interest was there before [the outbreak] but now there is more interest from institutional investors,” says Cornetti. “We did have a €1 billion target before the crisis, but it’s much easier to reach that goal now. In Italy, traditionally the public sector invests in this kind of asset. Now the public understands it is not able to cover all the needs of social infrastructure.”

As has been the view of many market figures in other infrastructure sectors, there is a belief that cash-strapped governments will lean heavily on the private sector to fund recoveries.

“The covid-19 crisis has made people more aware of the lack of investment in social infrastructure assets such as healthcare or even items like ventilation in schools,” says Jacobs. “There is just not enough public money available to upgrade these. Therefore, private capital offers a strong opportunity that can work with public capital and be long-term and aligned.”

However, there is little evidence that governments around the world will be relying on private capital to give these assets a boost. For healthcare assets in particular, governments may be wary of the public relations fallout of responding to a medical crisis with the introduction of further private capital, especially given that the role of privately owned care groups during the initial outbreak is likely to come under the microscope. “The need is there,” argues Inderst with regards to healthcare. “Do I see much privatisation happening? No. If anything, it’s going more in the other direction.”

He points out that covid could also have a significant knock-on effect for the student accommodation market if the situation continues to worsen: “Where things are happening a bit more at the moment is [social and affordable] housing, and managers are getting more active in that area.” The substantial increase in social infrastructure-specific funds and the crossovers with a real estate sector that faces an uncertain future in its traditional markets mean the interest is only likely to keep growing. As Jacobs points out, the crisis has shown social infrastructure to be a particularly defensive asset class.

As investors look to expand their exposure to it, they will have to carefully weigh how social infrastructure fits in, and whether its varied sub-sectors truly carry the essential and long-term tag that infrastructure brings.

The view from North America
The North American market for social infrastructure is a contrast between mature opportunities in Canada and what investors suggest are burgeoning developments in the US, writes Jordan Stutts.

“The success of the Canadian market has been aided by the fact that these social services are typically championed and funded at the provincial government level and are less susceptible to local politics and project cancellations,” Giacomel explains.

It has been a different story in the US, where social assets are procured at a more local level, “which involves a higher degree of public debate, political challenges and funding constraints”, he says. The burden of funding social infrastructure projects has fallen on municipalities with limited debt capacity or access to federal funding. Giacomel says this has resulted in projects with heightened risks, which has ultimately kept a large part of the private infrastructure market away.

However, opportunities are “slowly starting to emerge” due to covid-19. “The challenge that governments are facing, beyond access to funds, is the speed at which they need to get projects to market to address new priorities,” Giacomel says. “This is resulting in efforts to explore new ways to accelerate the procurements and mobilisation of private capital through more open-book progressive PPPs.”

Sia Kusha, group head of project development and partnering at developer Plenary Americas, agrees the outlook for the US social infrastructure market is “very bullish” in light of covid. “The need for social distancing has already begun to impact design developments,” he explains. “Building performance with respect to occupant health, safety and welfare concerns will dominate facility management discussions, while the current economic downturn will provide an opportunity for owners to deliver critical infrastructure faster and [in a] less costly [manner].”

Ultimately, he adds, “the market will be different in how assets are designed and used, and how projects are procured and delivered”.

This is the first installment of a three-part Deep Dive on social infrastructure. The second installment on healthcare and the third on education will be published later this week.