Infrastructure Investor
Home News & Analysis PPPs are in trouble. Is it time to bin them? 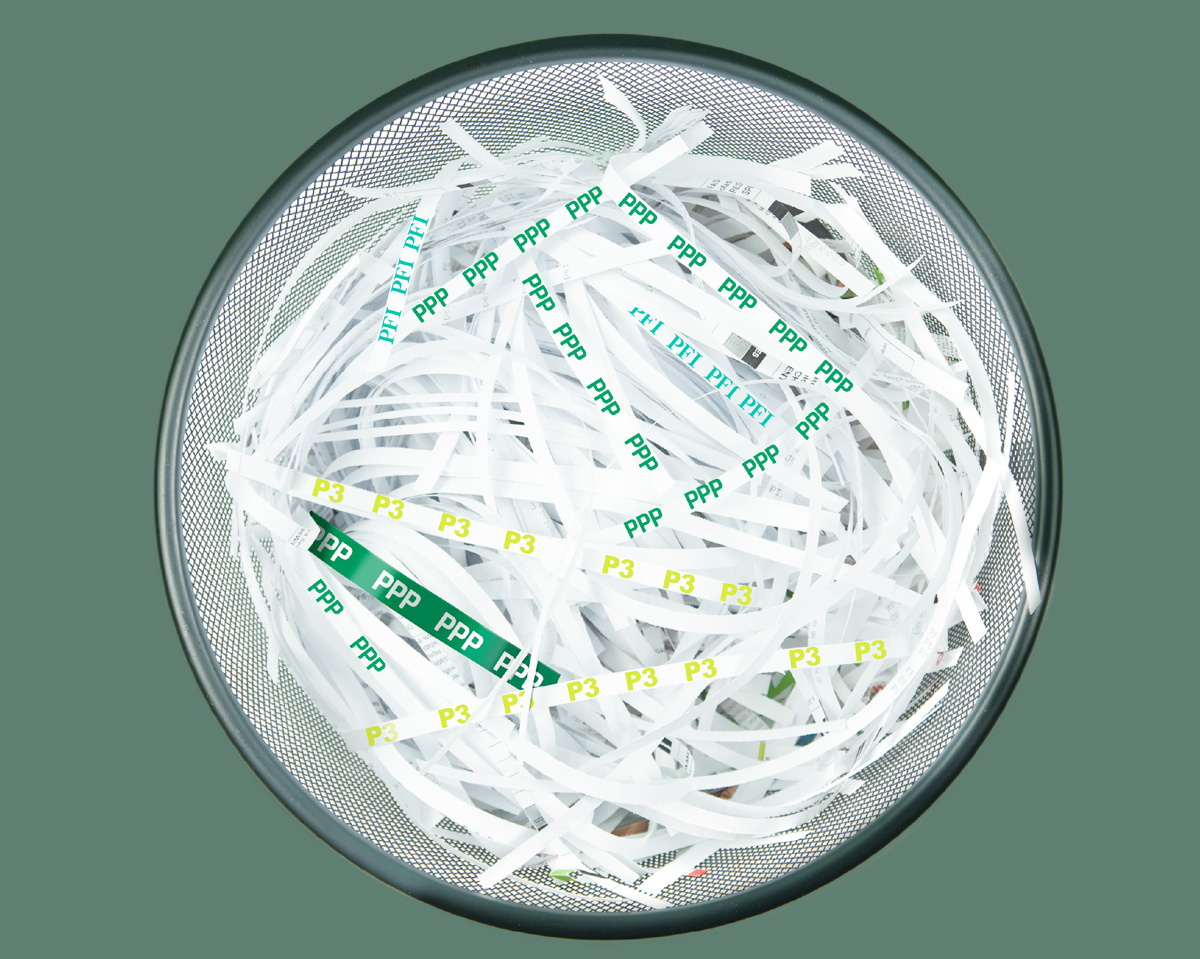 Public-private partnerships – the procurement framework, not the sentiment – have been in trouble for some years now.

Harsh as that may sound, the numbers tell the story. As Inderst Advisory’s Georg Inderst told us last year: “PPP volumes are stagnating at 0.1 percent of global GDP and only 2-3 percent of total infrastructure spending.”

The number of projects has been falling across Europe since the global financial crisis, data from the European PPP Expertise Centre show. And as 2018 drew to a close, the UK’s private finance initiative and its successor, PF2, which had been responsible for delivering 716 projects over 25 years, according to the UK’s National Audit Office, came to an ignominious end.

We spoke to 20 industry sources across three continents for this report and found several reasons why the procurement framework has been in decline. Some are region-specific, while others are more general. Among the key points of contention were contractual rigidity, inappropriate risk allocation, lack of clarity about value for money, public-private disenchantment and lengthy procurement processes.

Resuscitation required
Thankfully, the industry also has some robust ideas about how the model can be brought back to life. ‘Living contracts’ that would be frequently updated is one, while others include mixing public debt with private equity, reorienting the model towards maintenance and a radical relaunch as an emissions-focused reduction framework.

The main cause of frustration, among contractors at least, is the inappropriate risk allocation. Too much risk is being transferred to private capital investors and then passed on to contractors.

“In the end, risk allocation is defined by the market,” says Thierry Déau, founder and chief executive of Paris-based Meridiam. “If we all jump in and accept everything the client [public sector] demands, then that’s what the market is. But if you push back by not competing under those terms, the client will adjust the risk allocation.

“We’ve gone to places where the government has pushed [risk] all the way down because people accepted it. But you don’t have to. You can say ‘no’.”

Another criticism levelled at the model is the fixed-price component, although Maud de Vautibault, director, practical tools and knowledge at GI Hub, argues that this is not a problem per se.

“In a typical PPP procurement process, the candidate – the private consortium – has to commit to a fixed price in its best and final offer,” she says. “Yet, at this stage, the design of the infrastructure project is generally at a preliminary outline and not a detailed design phase. The price is therefore based on assumptions and ratios.” That is when problems arise, says de Vautibault who, before joining GI Hub in January 2019, had spent four years at the French treasury’s infrastructure finance and PPP unit and 15 years at Bouygues before that. One of the solutions she proposes is the collaborative model, known as Alliance Contracting in Australia or as Project 13 in the UK. This, she says, enables “the public and private sector to work more collaboratively during the design phase with a target fixed price for the construction costs”.

She also cites a recommendation by the UK’s Institution of Civil Engineers, which has called on public infrastructure owners to award contracts based on a cost-estimate range. This would involve using a ‘should-cost’ estimate as a reference point and allocating an amount of contingency funding appropriate to the level of project maturity.

[A PPP is] not a panacea and it’s not a magic wand regardless of the jurisdiction. I think that’s the mistake the public sector is making – thinking it’s free money. It’s not.

Gordon Bajnai, former prime minister of Hungary and the current head of global infrastructure at placement agent Campbell Lutyens, finds the cost-estimate option impractical. “That would make it very difficult to determine who is making the best offer,” he argues.

Instead, elements of the PPP model Bajnai would like to see changed include allowing for the private sector to write bigger equity cheques, which would create the conditions for a more meaningful transfer of risk.

Another key complaint is the lengthy procurement process. “It could take two to three years from the beginning of procurement with the private partner required to spend millions – sometimes tens of millions of dollars,” says Bajnai. “That’s a huge risk. That should be rationalised, and the time needed to award contracts should be reduced. But otherwise, overall, I think PPPs have a future.”

However, Bajnai’s vision for the future of PPPs in Europe and other developed markets – which have, for the most part, built the infrastructure they need – is to maintain existing infrastructure. This, he explains, would be “closer to what you’d call a classic concession”.

“For example, airport concessions are a kind of PPP, where you operate and maintain an airport for 30 or 40 years,” he says. “You undertake some expansion and some capital expenditure, but with more complex maintenance and operations. I think that could work in road maintenance, for example, transferring the whole risk to the private sector.”

Yet Mathias Burghardt, head of infrastructure at Paris-based Ardian, argues that if the PPP model is to gain a new lease of life it will require drastic changes.

“I personally believe that the PPP model as it was originally designed is not well adapted to the needs of today,” he tells Infrastructure Investor. “It doesn’t favour innovation, but even more importantly, it doesn’t have the flexibility to adapt to change – whether that’s environmental, technological or with regard to evolving customer needs. So, for these reasons, we need to reinvent the public-private partnership as a totally different scheme.”

Burghardt explains the ways in which he thinks PPPs have failed, though he acknowledges there have been numerous successful examples. “On the public sector side, there was frustration because many times PPPs failed to deliver benefits from a value-for-money perspective,” he says. “Basically, the model was perceived as an expensive way of financing infrastructure, without necessarily providing better services.”

A contentious debate
Whether PPPs provide value for money has been debated for as long as the partnerships have existed.

But, as several of our interviewees point out, the comparison with traditional procurement is seldom on a like-for-like basis.

“What we see in Europe is more of a political, public-policy backlash – people questioning the model because they’re often not able to do a proper value-for-money exercise,” says Meridiam’s Déau. “You have the European Court of Auditors, the French, the Germans – they all basically compare apples and oranges and say the PPP model is too expensive. But they never really compare it the way the UK’s National Audit Office has done, which is to compare the model with traditional procurement to show where the gains are and to take into account the externalities and risk.”

“The key positives of the PPP model – whether a user-pay model or availability-based model – are that the ‘life-cycle’ or ‘global’ approach is a better way for the public sector to deliver infrastructure on budget and on time,” says GI Hub’s de Vautibault. “It is the best way for the public sector to reach the expected outcomes in terms of service quality for the end-users.” This position was backed by the UK’s National Infrastructure Commission in its report, Evaluating the Performance of Private Financing and Traditional Procurement, published last July.

It is also crucial that PPPs are done right and for the right reasons. Some governments have given in to the temptation to procure projects as PPPs because doing so enables them to shift the related costs off the balance sheet.

In September 2018, the European Court of Auditors – having examined 12 PPPs co-financed by the EU in France, Spain, Greece and Ireland – wrote in a report that there was a danger of governments having a biased approach towards PPP projects even in cases where value-for-money considerations could lead to different choices, and of other negative side effects such as unbalanced risk-sharing arrangements and higher costs for the public partner.

This is why Déau insists that greater transparency, from both the public and private sectors, is required.

“The public sector shouldn’t engage in PPPs without doing a full value-for-money exercise, identifying the reasons they’re doing it and determining whether they have the skills to do it,” he says. “That’s the issue: do they have the adequate skills, and have they conducted an adequate analysis to justify doing a PPP project?

“It’s not a panacea and it’s not a magic wand regardless of the jurisdiction. I think that’s the mistake the public sector is making – thinking it’s free money. It’s not.”

Save PPPs and save the planet?

For Mathias Burghardt, head of infrastructure at Ardian, the main problem with PPPs lies in the model’s inability to adapt to a rapidly changing world.

“The scheme, as it is today, is based on building,” he says. “It’s not about finding innovative solutions through digital optimisation, for example, which will enable us to do better in terms of quality of service without necessarily spending more.

“Ardian is the second-largest toll road operator in the world. Today, there is a need to reduce carbon emissions so, as operators, we should be incentivised to promote car-sharing. We do, but if we do it too well, we will reduce traffic volumes and we will be penalised for it through lower returns. You shouldn’t be compensated based on the number of cars, but rather by the number of people using the roads. Because if you have more people with fewer cars, you’re benefitting the environment.”

According to Burghardt, the time when infrastructure development was driven by major construction companies focused on building the biggest project is over, at least in developed markets.

“People don’t expect us to deploy more and more mortar. We have to do better with existing infrastructure. The question is how do we use digital innovation and technology to increase capacity and efficiency – whether that’s an airport, road or railway – without building more?

“Whether we’re talking about PPPs or concessions, we need to make very drastic changes in demonstrating the benefits that a new form of PPP can deliver. I think the historic opportunity of the PPP [model] will be to contribute massively to carbon emissions reduction. That, for me, would be the only way to revitalise PPPs.”