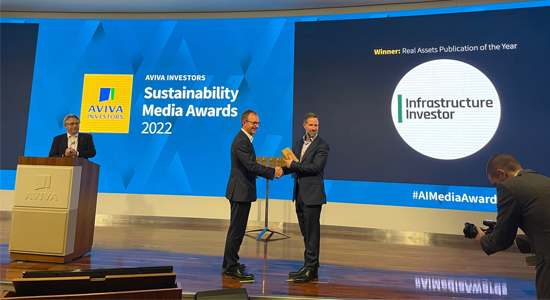 We made sustainability a key focus of our coverage many years ago, and that was particularly evident over the past year, with cover stories on impact investing and hydrogen; three special reports on the energy transition, impact investing and sustainable investing spanning a combined 300 pages; and a special 52-page edition of Infrastructure Investor – The Climate Issue – entirely dedicated to how climate change is affecting the asset class.

It’s fair to say the team is extremely proud of this award – and thankful to Aviva and the judges for the recognition.

Now, on to your scheduled programming.

KKR adds $5.5bn to claim APAC fundraising crown
KKR’s infrastructure expansion into Asia has been competitive with fellow infra giant Macquarie Asset Management. In Q2, KKR CFO Rob Lewin said during an earnings call that after raising more than $4 billion, KKR clearly had the “number one franchise” for APAC-based infrastructure.

Q3, it seems, also packed a winning punch – despite falls in the quarter from private equity and real estate – with Asia Pacific Infrastructure Investors II garnering another $1.5 billion, bringing the fund to $5.5 billion, according to end of Q3 accounts. That already dwarfs the $4.2 billion May final close of Macquarie’s third Asian infrastructure vehicle, the region’s largest infra fund.

In the Q3 earnings call, Craig Larson, head of investor relations, said, “our Asia infrastructure strategy… was certainly one of the contributors to [the positive performance of] real assets in the quarter”, while CEO Scott Nuttall stated that “we continue to see a lot of opportunity there and frankly, less on the ground competition”.

Opportunity, overall, abounds, with $11 billion deployed globally in infrastructure in the last 12 months, compared with a little over $2 billion in 2020.

Have a more in-depth read here about the somewhat surprising pace of the KKR infra juggernaut in our November cover story.

Antin nears €7bn for latest flagship
After bagging a €5.3 billion first close for its fifth flagship fund last month, Antin Infrastructure Partners has revealed in its latest earnings report that it has now raised €6.8 billion for the vehicle. Fund V is targeting €10 billion with a €12 billion hard-cap. In addition, the French manager said it has secured €900 million for its debut NextGen Fund I at the end of Q3. The vehicle is targeting €1.2 billion with a €1.5 billion hard-cap.

It’s not all about fundraising, though. Antin has also deployed €3.1 billion (€4.7 billion, counting co-investments) over the last year across its flagships, Mid Cap and NextGen funds. That means Fund IV is now circa 70 percent invested, with the remaining capital earmarked for growth investments in its portfolio companies. Mid Cap is about 36 percent invested, with NextGen at 22 percent.

Finally, exit activity amounted to €2.4 billion over the past year (€2.6 billion with co-investments), which means Antin’s €2 billion second flagship is now 91 percent realised, with the €3.6 billion Fund III at around the 23 percent mark.

No idle hands at Antin HQ, then.

Ares AMPs up its Infra Debt Fund V
Ares Management acquired its infrastructure debt business through a much-publicised deal with AMP Capital late last year. And it’s safe to say that’s now yielding the results the US group expected for it.

The newly-named Ares Infrastructure Debt Fund V, which had been launched during the stuttering final months of AMP Capital’s infrastructure business, raised another $500 million in Q3, reaching $3.9 billion to date against a $5 billion target. During the firm’s earnings call, CEO Michael Arougheti was “pleased” that the infrastructure debt strategy was being “well-received”.

That’s not all, though. Ares said it also plans launches of its second climate infrastructure fund and third infrastructure secondaries vehicle, which are part of fund launches across private markets targeting an overall $45 billion.

Arougheti will surely be more than “pleased” when that comes off.

Troubled waters for US offshore wind
The future of Commonwealth Wind, a planned 1.2GW offshore wind site in Massachusetts, is in doubt after developer Avangrid Renewables, part of Iberdrola, suspended work on the site for a month.

The problem? The $72 per MWh agreed in power-purchase agreements awarded last December by the state. Since then, the project has been hit by “unprecedented commodity price increases, interest rate hikes, and supply shortages [affecting] the overall viability of Commonwealth Wind’s offshore wind generation project that is the subject of the PPAs, including whether it remains economic and whether it can be financed under the current terms of the PPAs”.

Currently, Avangrid deems the project “no longer viable and would not be able to move forward”. The month suspension will be used to assess options, including increasing the PPA price, cost-saving measures and potential tax incentives provided by the Inflation Reduction Act.

Commonwealth Wind has been fully owned by Avangrid Renewables since January, after Copenhagen Infrastructure Partners divested its stake. A timely exit, it seems.

2022 awards: Send us your submissions!
We’ve just won an award, but you can too! Infrastructure Investor’s annual awards remain the only infrastructure honours decided solely by the industry. After another very successful edition last year, with thousands of votes cast for our 60-plus categories, we are hoping for an even bigger 2022. If you’re wondering what should go into your submissions, we’ve compiled a handy guide for your convenience.

We are getting the ball rolling by inviting you to submit your firm’s achievements in 2022 by Tuesday 22 November. Don’t miss your chance to do so HERE.

Frédéric Baudry, head of BP in Australia, calls for an Inflation Reduction Act-equivalent in the country, in an interview with the Australian Financial Review

Seoul-based Kim, who joins the firm from his role as country manager at Renova Renewables – where he was responsible for the development of renewable projects in Korea – will head up Aquila’s clean energy business there.

“I look forward to expanding Aquila’s business in Korea, a country which has great potential for renewable energy growth,” Kim said in a statement.

The appointment follows the April launch of Aquila Development Partners, the firm’s joint venture with Korean company TopInfra, focused on developing solar, wind and battery storage systems in the country.

Aquila expanded its Singapore office in October 2020 to create a new regional hub and increase its focus on the Asia-Pacific region.

NZ Super laments ‘unattractive’ infra
Despite the fundraising successes reported in this edition, not every investor is enamoured of the asset class.

In its annual report, the New Zealand Superannuation Fund said it has been “underweight in real assets for some time”, elaborating: “This reflects our view that real estate and infrastructure have not been attractive sectors in which to allocate capital, as strong demand for real assets from pension funds has bid prices up to high levels. We have recently added internal resourcing by hiring real asset specialists and, as pricing becomes more attractive, we will look to actively build our exposures in these sectors.”

And that build up looks set to begin in earnest, especially in its domestic market. NZ Super Fund has developed what it calls the ‘SuperBuild’ model, with an example investment including its partnership with Copenhagen Infrastructure Partners to explore the feasibility of offshore wind. Getting in early is another way to help with frothy pricing for brownfield assets – so expect to see more as the fund aims to deploy further capital in nation-building projects in New Zealand. 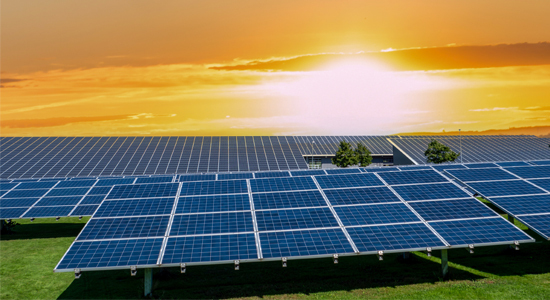 Actis inks deal for 1GW of Romanian solar
Europe’s soon-to-be-largest solar plant will be developed by Actis portfolio company Rezolv Energy and should be ready by 2025.

“Romania is interesting because there’s been very few utility-scale renewable projects built in the last 10 years. Also, there are few European markets where you can secure a grid connection at 1,044MW and where the land can be accrued on a single site. So, in many ways it’s unique,” Jim Campion, CEO of Rezolv Energy, told The Pipeline.

The full capital requirements for the project will exceed €800 million.

Around two-thirds of the power from the project will be sold to commercial and industrial users through long-term power-purchase agreements, says Campion, while the rest will be merchant or shorter-term contracts. A co-located 135MW battery storage system should help reduce balancing costs, with construction set to begin in summer 2023.