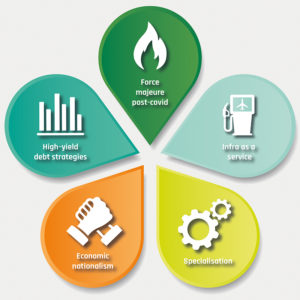 This is the first story in a five-part series, in which we explore themes we believe will shape the year ahead

The novel coronavirus caught even the most eagle-eyed of investors unawares in 2020, upending business cases and causing many to reassess the level of risk involved in what had been seen as rock-solid assets.

In many instances, the restrictions imposed by governments across the world to keep the virus at bay meant investors and the counterparties to their contracts had to negotiate.

Infrastructure investors often do not own the assets they invest in, of course, instead holding long-term concessions to operate them, under agreements made with conditions attached. Or, if they do own them, investors will have made agreements with other suppliers and stakeholders that came under strain in 2020 as covid-19 surged.

This is where force majeure clauses come into play, which can relieve one or more parties to a contract from their obligation as a result of something outside their control.

A global pandemic, you would expect, falls into that category.

But how robust were these clauses and did they prove fit for purpose when the worst happened? And how has the negotiation of contracts changed now that the risk of a pandemic is much more obvious?

Michael Lawson, a partner at King & Wood Mallesons, based in Singapore, says the multinational law firm saw the contract negotiations and the triggering of force majeure move though several clear phases last year.

“With our Chinese presence, a lot of the advice we gave in early 2020 was China-centric, but that pretty quickly swung to a general analysis of force majeure across the board,” he says.

David Phua, special counsel at KWM, also based in Singapore, says the firm did see quite a few force majeure provisions formally triggered as covid hit more countries and lockdown measures started to take effect – but it didn’t usually result in disputes.

“Once the force majeure provision has been invoked, the parties very often move into a phase of commercial negotiation, rather than duelling over the legal wording of the clause,” Phua says. “A lot of force majeure clauses, even before covid-19, did broadly contemplate an epidemic or a pandemic that would invoke force majeure relief, and we’ve seen several contracts where this was the basis of claims for force majeure.”

“The event which has had an impact on contracts is the government response to the virus, whether that is shutting of borders or working-from-home requirements”

With many clauses explicitly mentioning a virus, Lawson says a majority of clauses generally proved fit for purpose.

“There are myriad different force majeure clauses, but there was enough to point to in most clauses to provide a basis for discussion in a circumstance such as we have experienced in 2020. None of the contracts that we were immediately involved with – and I suspect proportionately very few elsewhere – proceeded to formal litigation after the clause was activated, which is pretty typical. These provisions are usually a trigger for commercial discussions and don’t often go all the way through to the conclusion of a formal dispute-resolution process.”

Joel Rennie, partner at White & Case, based in Sydney, says “pretty much any” project that was under construction had a force majeure claim against it last year, but that nearly all of these claims had been resolved in a “pretty amicable” way.

Where wrinkles came in, he says, was in how the clauses related to other change-in-law clauses that are common in these types of contracts.

“While the force majeure clause itself sets out a regime for extensions of time and the like, some of the claims were being raised in the context of the change in law, which was triggered through by [changing] government regulations and controls introduced to combat covid-19,” he says.

“The market wasn’t paying too much attention to how force majeure clauses interacted with the change-in-law provision.”

This is echoed by Lawson, who says that it’s not always a straightforward case to see if a claim is well-founded or not because of this.

Where potential uncertainties arise is the specific wording on how the clause has been triggered. Sometimes, depending on the type of asset and how it operates, mention of a pandemic alone might not be enough.

“The trickier question is why the force majeure in question has prevented the party’s obligation under the contract – or rather, why the party couldn’t have mitigated the effect of the force majeure? It’s not always a straightforward case to see if a claim is well-founded or not,” Lawson says. “It’s not necessarily just the pandemic-type language, it’s that around governmental actions which is very important.

“With some of the more recent deals we’re doing, the current risk position is better understood, so we’re seeing more carve-outs related to covid”

“The virus itself may have very little to do with preventing performance in a lot of cases. The event which has had an impact on contracts is the government response to the virus – whether that is shutting of borders or working-from-home requirements – which has an impact on contracts. But, most provisions we saw were sufficiently broad, or contained that sort of detail, in a way that was sufficient to at least provide a basis for a conversation.”

This was the case for one Australian GP that Infrastructure Investor spoke to, who wished to remain anonymous. The manager in question holds the concession for an Australian asset that effectively stopped generating revenue once international borders were closed and the government issued stay-at-home orders.

“We had some difficult conversations at the beginning, but once the World Health Organisation officially declared covid-19 to be a pandemic, that was it. It was the basis for force majeure and we could undergo commercial negotiation,” the GP recalls.

What does the future hold for contract negotiations and force majeure clauses now that the world has lived with covid-19 for more than a year?

“We’ve seen fewer force majeure claims in the last couple of months compared to early in the pandemic, as many of the issues have now been flushed out in earlier stages of discussions. But it’s still a developing area,” Phua says.

Deals were still being done during the pandemic, of course, meaning that particular attention was paid to force majeure while disruption was still occurring across the globe.

“The focus was very much on making sure that you were entering into a contract that wasn’t subject to force majeure on day one, because that’s obviously not bankable,” Rennie says. “Clients were looking for a lot of disclosure around the known impacts of covid. In greenfield projects, for example, you’d be making sure that the contractor took risk on based on the current position at the date of contract.

“Once the force majeure provision has been invoked, the parties very often move into a phase of commercial negotiation, rather than duelling over the legal wording of the clause”

“With some of the more recent deals we’re doing, the current risk position is better understood, so we’re seeing more carve-outs related to covid generally, with people more comfortable taking risk related to the current situation and of covid itself not being a force majeure event.”

Lawson says it is an open question as to what force majeure clauses should look like, and how they should operate, in future.

“Force majeure in common law jurisdictions is totally a function of what your contract says and how it applies to your particular circumstances. If your contract doesn’t say anything, you don’t have force majeure protection,” he says.

“The question of foreseeability comes up. Now, we’re aware of covid-19 and have been dealing with it (and we are more conscious of the threat of pandemics generally) – and we know it’s often government responses, rather than the virus itself, that can be the cause of many issues with contractual performance.

“There are interesting questions for the industry to grapple with in terms of exactly what their force majeure provisions say, to what extent is foreseeability a relevant consideration, and what does that mean for project investors, participants, suppliers and offtakers in terms of the protection they have.

“This is especially so now that it might be argued that covid-19’s and other potential pandemics’ impacts are well understood, and events that 10 months ago you’d have said were unforeseeable, and that we couldn’t have reasonably done anything to work around, may not be the case now.”

Lawson points out, too, that has been a real impact on contract negotiations and the realisation that the triggering of the clauses is a genuine possibility, especially for some investors who might have viewed them as hypotheticals.

“Force majeure, of course, excuses one party to the detriment of the other, so it’s not necessarily a unanimous view that everyone mutually agrees that you should have a robust set of protections around force majeure,” he says. “Sometimes it is not clear which party will need to rely on a force majeure provision. But in the energy space, where we do a lot of deals, it’s pretty clear that there’s one party performing most of the physical obligations and is likely to be most affected by force majeure events.

“So in the energy and infrastructure sector it’s often a heavily negotiated position even in normal times.”

But all parties are now far more alive to the risk of a pandemic than before – and of ‘unforeseeable’ events in general. We can therefore expect negotiations to become more pointed and perhaps more complicated in 2021, as stakeholders work through their concerns.