APG, which manages the pension assets for around 4.5 million Dutch people, has emerged as the lead investor in the tender offer on Arcus Infrastructure Partners's 2007 fund, sister publication Secondaries Investor reports .

London-based Arcus, which manages European infrastructure assets, is aiming to extend the fund's life for another 10 years.

The Dutch pension administrator has acquired a €420 million stake in Arcus European Infrastructure Fund 1 (AEIF 1), a spokesman for the pension fund confirmed. The process, which began last year, had a first close at the beginning of March and has generated a total of about €600 million of liquidity for existing investors so far, with the remainder going to eight other buyers. In total, the final close expected by the end of April will likely reach €800 million, according to a source familiar with the deal.

“These types of situations make a lot of sense to LPs currently in the market,” the source said.

Nine underlying investors bought into the fund including SL Capital Partners, IST3 Investment Foundation, Lothain Pension Fund and Swiss grocery retailer's pension fund Migros-Pensionskasse, according to the filing. Some of the nine investors were new to the fund, and others were increasing their exposure to the fund, the source said.

Arcus is attempting to replace LPs in its €2.2 billion vehicle as it seeks a 10-year extension for the five asset vehicle. The firm hired Campbell Lutyens in the second half of last year to look for a lead investor who would acquire a significant volume of the fund's interest, according to the source. The firm decided to offer an optional liquidity solution to LPs, with a portion deciding to sell their stakes. LPs were given the option to sell at price and with terms determined in the process, and those wishing to retain their stakes could remain in the fund with unchanged terms. Those who sold achieved attractive pricing, the source said. After APG was selected as the lead investor last December, pricing was put to existing LPs in early 2016. 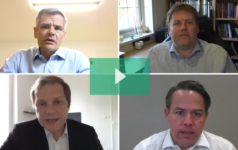 Webcast: Is co-operative investing the next trend in core infra?