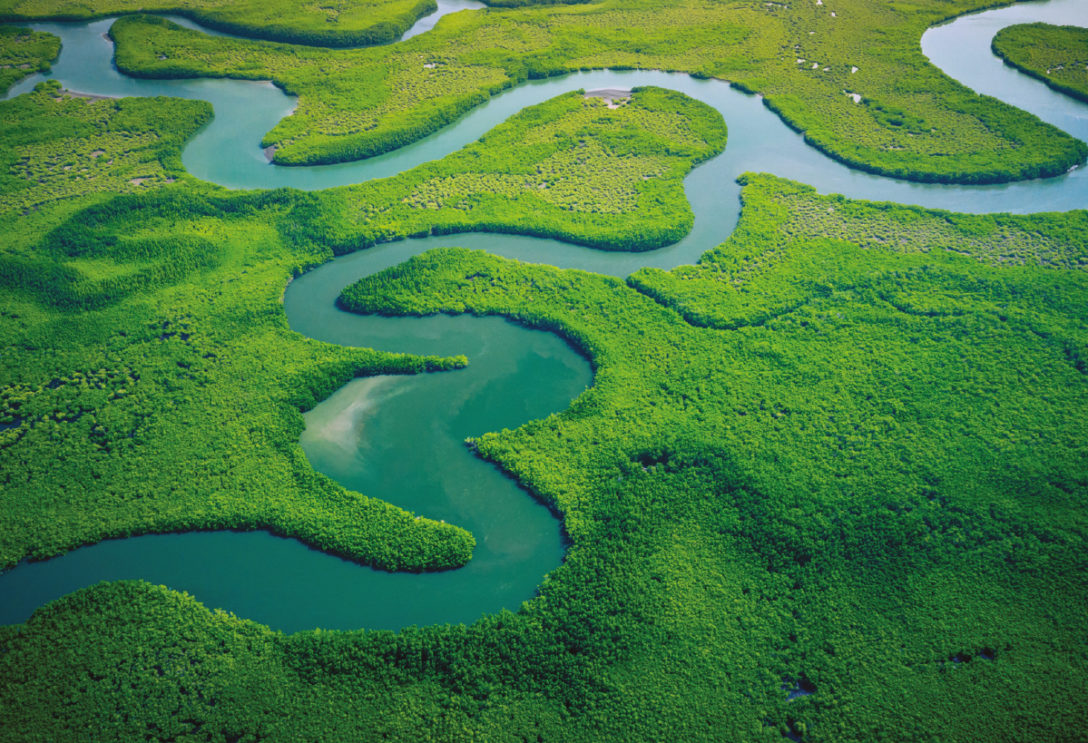 The climate crisis is upon us, with little time to waste. Not only must we accelerate the transition to net zero and reduce emissions in line with the Paris Agreement, we also need to adapt to the impacts of global warming that communities around the world are already facing – unrelenting drought, flash floods and extreme heat.

Often, when we talk about the built environment, we mean traditionally engineered options, such as concrete highways and roads, wastewater treatment plants, brick buildings and so forth.

Today, however, there is a growing conversation about the role of nature in either complementing these structures or substituting them entirely.

Nature-based infrastructure – such as managed wetlands and marshes, green roofs and re-naturalised rivers – can not only perform the same functions as traditionally built infrastructure; it often comes with additional social and environmental benefits (think cleaner air, healthier soil for farming, greater biodiversity).

So why hasn’t it taken off until now? One reason is the lack of shared knowledge. There hasn’t been a go-to source of resources, case studies and relevant data that could help nudge infrastructure investors on to this path. Another reason is that there is not enough guidance on best practices. And another reason still is that no valuation methodologies go beyond financials to look at the bigger picture.

“The additional benefits nature-based infrastructure provides can be quantified in dollar terms – roughly, another $240 billion per year”

Several institutions are working to tackle that knowledge gap head-on. One example is the new Nature-Based Infrastructure Global Resource Centre, an initiative launched in October by IISD, the Global Environment Facility, the MAVA Foundation and the United Nations Industrial Development Organisation. The centre will spend the next four years conducting more than 40 assessments of nature-based infrastructure projects based on submissions from applicants all over the world.

These infrastructure assets will range from forests, coasts, rivers and wetlands to urban examples, such as green spaces, green roofs and green walls. Project planners, infrastructure investors and infrastructure fund managers will also have access to data and training so they can conduct their own valuations.

It is an exciting start, and one that shows the value of forming partnerships. We hope to see more initiatives like this emerge in the years ahead.

There is no getting around it: the sheer cost of the infrastructure we need right now is staggering. Although estimates vary, research suggests we must invest over $4 trillion each year, worldwide, to meet our development needs. Some of this will need to come from governments, but a significant chunk must come from the private sector. Nature can help tackle this infrastructure investment gap – and save us money in the long run – but we’ll need to shift our approach to valuation. With grey infrastructure, project planners and investors have traditionally measured potential costs and benefits in purely financial terms: net present value, for example, or internal rates of return. But this is only one part of a much bigger picture.

We can get a more comprehensive analysis of how any infrastructure project – grey or nature-based – performs over its lifecycle if we incorporate other considerations into our assessments. These include environmental, social, economic and governance risks, which are normally excluded from financial valuations. In doing so, we can see that many of the needs we are trying to address (cleaner air and water, for instance) can be met by nature-based infrastructure at a lower cost and with additional benefits.

A global look at the literature is promising. At least 11 percent of the infrastructure we need to achieve the Sustainable Development Goals and be in line with the Paris Agreement can be met by investing in nature-based infrastructure. More astounding, the cost savings each year from making this change could amount to nearly $250 billion. Our research also finds that the additional benefits nature-based infrastructure provides can be quantified in dollar terms – roughly, another $240 billion per year. This data is especially valuable for private investors, which have been reticent to invest in nature in the absence of a clearly established business case in its favour.

Lessons from Italy and South Africa

We already have detailed assessments of projects from various parts of the world that show the difference it makes when we build with nature.

Our assessment on Sardinian wetlands in Italy found that, over 40 years, these wetlands could generate ecosystem services worth more than $350 million, despite their expected degradation. Protecting them could yield nearly $200 million, especially when it comes to nitrogen removal, which supports crop production and aquaculture and thereby local livelihoods.

There are also many lessons to be learned from Johannesburg. This city is already facing the strains of a changing climate: floods are one risk, intense heat is another. The extreme weather is damaging much of the existing infrastructure, from bridges and roads to stormwater drains.

We analysed the Paterson Park precinct to see what upgrading its stormwater infrastructure would entail and found that re-naturalising a river stream or including other nature-built components could lead to a higher water supply, save money by reducing the flood risk, and create new jobs with higher incomes.

The numbers are impressive, and our assessments of real-life projects are showing true promise. What’s more, international events such as the UN Framework Convention on Climate Change’s recent COP26 summit in Glasgow and the UN Convention on Biological Diversity’s COP15 in Kunming are showing that leaders recognise the role of nature in tackling our twin crises of climate change and biodiversity loss.

It is time for a massive injection of public and private investment, and for that we need one more thing to happen: nature-based infrastructure must be recognised and scaled up as an asset class, as it holds extraordinary potential for people, the planet and economies.
To achieve this, we need more data on how these projects perform compared with built infrastructure so that investors and other stakeholders can account for the risks and opportunities of nature-based alternatives based on a clear track record.

We also need innovative financing strategies, drawing on what we have learned from sustainable infrastructure and conservation finance. Although making nature-based infrastructure an asset class will not happen overnight, the NBI Global Resource Centre will pave the way towards this goal, generating support and momentum to make it a reality.