Net proceeds to Colony NorthStar for its ownership stake after transaction and other expenses is estimated to be approximately $379 million. Morgan Stanley acted as exclusive financial advisor for the transaction.

“The divestiture of Townsend is definitely bittersweet for Colony NorthStar,” commented Richard Saltzman, president and chief executive of Colony NorthStar. “But we’re extremely pleased that the talented Townsend team has found a great new home with Aon.”

In April, sister publication PERE reported that Colony NorthStar was exploring strategic alternatives for Townsend, including a potential sale. In conjunction with the sale, Townsend also was said to be seeking to recapitalise its business with new capital sources.

“Townsend is a terrific non-core legacy NorthStar business, but by the closing of the Colony Capital/NorthStar merger in January of this year, it became clear that the market perceived a conflict with Colony’s institutional investment management business,” said Saltzman. “For these reasons, Colony NorthStar’s sale of Townsend to Aon is a winning outcome for all three organizations.”

In October 2015, NorthStar Asset Management, one of the predecessor entities to Colony NorthStar, agreed to acquire an 85 percent interest in Townsend for $380 million. Subsequently, NorthStar Asset Management entered into a three-way merger with Colony Capital and NorthStar Realty Finance. The merger closed in January, creating a real estate and investment management powerhouse with $56 billion of assets under management.

The deal is expected to close over the next six months and is subject to certain customary and negotiated closing conditions. 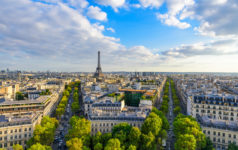