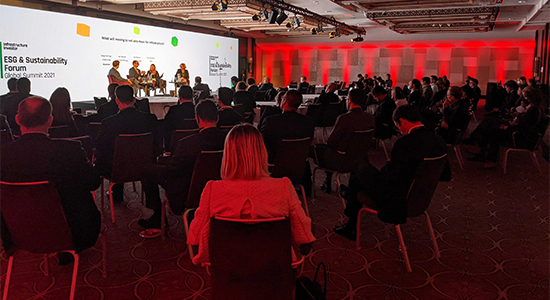 There may be ongoing discussions about how to measure ESG, or what exactly is encompassed by net-zero targets, but no one is in any doubt about the direction of travel.

“I think there is a sea change going on,” Gordon Bajnai, Campbell Lutyens’ global of head of infrastructure and a former Hungarian prime minister, told attendees. “A few years ago, the most progressive LPs had an impact pocket. Now, ESG and net-zero frameworks are must-haves.”

Of course, that’s not to say the detail doesn’t matter. Take offsets, for example. As Cameron Talbot-Stern, senior responsible investment and ESG manager for APG Asset Management, put it: “Offsets need to be part of a larger strategy. First, nature-based solutions and lastly offsets for the hard-to-decarbonise assets. If a company only does offsets, it’s a bit of a red flag, as it means they’re not putting real effort into abatement.”

“We’ll be at net-zero without offsets and we expect to sell offsets [from our agri portfolio] but some assets like transportation will have to purchase offsets,” argued John Anderson, Manulife’s global head of corporate finance and infrastructure. “There can be some fussing here and there, but in terms of efficiency and bang for buck, offsets will be part of the solution.”

“One German insurer boss told me: ‘I’d love to invest in social infrastructure. Show me the projects’”

Ask and you shall receive, or so the saying goes. So to the German investor that asked Georg Inderst of Inderst Advisory to show him the social infrastructure projects he could invest in, we give him the below deck, from PwC’s South Eastern Europe technology consulting leader, Vlado Šarenac, featured at one of this year’s sessions on social infra.

“They’re the ones with the biggest needs,” noted Spence Clunie, managing partner of Ancala Partners, at the session. So what’s the score? Hospitals have high potential and low barriers to entry, but the atomised world of small pre-school facilities, such as kindergartens, have very low potential due to high constraints.

Gas is fuel for Patria

The run-up to COP26 in the midst of an energy crisis means the role of natural gas is under the microscope – and it was no different at the first session of our emerging markets stream.

“For us, it is not a transition fuel,” he said. “Natural gas is growing a lot in the region. It is the least invasive fossil fuel you can imagine and it’s displacing coal and diesel. We are quite bullish on natural gas.”

Whether you label it a ‘transition fuel’ or just ‘a fuel’ – and there are reasonable points on both sides of this debate – natural gas isn’t going anywhere anytime soon.

“Because of the tendency for secrecy in finance, and I think in private equity in particular, if something goes wrong, it’s quite easy to hide it,” Wall Street Journal reporter Simon Clark said during Monday’s keynote session. “I don’t think that’s healthy. I don’t think that helps the industry.”

Clark – who together with Will Louch wrote The Key Man, a book about the rise and fall of Abraaj Group – was referring to many of the LPs invested in Abraaj’s funds, including major development finance institutions and public pension funds that refused to respond to Freedom of Information requests submitted by the authors.

“There was an alleged serious fraud that took place here, people were duped, they were misled,” Clark continued. “Could investors have done better? Yes, in my opinion.

“But the judgement of conduct isn’t so much on that. To me, the issue is how do people respond when something goes wrong. And that’s where transparency and openness are really important. There can be mistakes. People can pledge to do something and then discover, ‘Actually, we can’t do it.’ That’s not wrongdoing. The grown-up thing in that situation is to have an open conversation about it.”