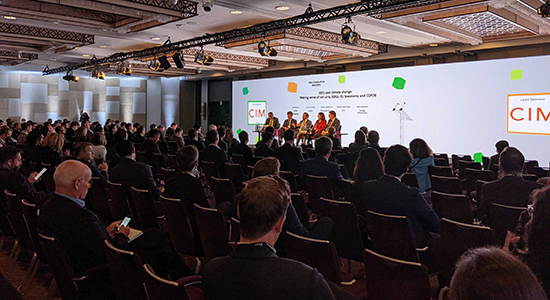 Future of transport? Sill flying, but maybe not as we know it

It was a whirlwind of a few minutes at Tuesday’s final session, as panellists debated infrastructure in 2022 and beyond.

Starting with the more traditional transport assets, Andrew Claerhout, partner and co-head of infrastructure at Searchlight Capital Partners, said that ports had “never had a better year than last year”. EQT’s head of real assets, Lennart Blecher, added that despite US-China tensions, EQT “has seen more Chinese ships than ever” at its Long Beach Container Terminal in southern California.

Claerhout then took a look to the future.

“In transport, there’s been some really interesting incremental opportunities,” he said. “In aviation, for example, you’re going to have drone ports where we’re going to park and take-off and recharge drones for drone delivery. There’s a lot in the advent of helicopter travel and we’re going to need helipads.”

The cost of failure

A common thread ran through many of Tuesday’s panels and keynotes – all tying into climate change. Some of the most passionate comments were delivered by Paul Polman, who, after spending decades of his career at major corporations such as Procter & Gamble, Nestlé and Unilever, founded Imagine in 2019, an “activist corporation and foundation” dedicated to issues such as fighting climate change and global inequality.

Polman underscored the urgency of the matter, noting that the world is currently on track for temperatures to rise 2.7 to 3.0 degrees Celsius, rather than the 1.5 degrees targeted by the Paris agreement.

And, given the amount of new infrastructure the world needs, the asset class can be critical in either achieving that goal or missing the target.

The good news, though, is that 90 percent of the solutions we need to achieve the energy transition in the next decade “are already here today”, he said. “Don’t wait for new adventures like carbon capture and storage. We need to increase investments in the right areas. [And those areas] are green investments, not greenwashing investments.”

“Every part of the infrastructure sector, every sub-sector, has a really important role to play,” Whitehelm Capital’s Graham Matthews said, during a morning panel on Tuesday, when asked how infrastructure sub-sectors, aside from renewables, can drive the energy transition.

One example Matthews pointed to was Sarpsborg Avfallsenergi, a waste-to-energy plant in Sarspborg, Norway that Whitehelm (which last month was acquired by Patrizia) bought in July 2016.

The plant processes domestic waste that would otherwise end up in a landfill. “Landfill produces methane, which is a 20 times more potent greenhouse gas than carbon dioxide is,” Matthews explained.

Beyond that, Matthews also pointed to non-energy related sub-sectors within infrastructure that have a role to play.

“Digital infrastructure, I think, is critically important here. So, building your smart city digital networks enables the application of technology in ways that really improve energy efficiency over time, ” he said. These ways to improve energy efficiency, which Matthews described as seemingly “mundane”, include putting sensors on garbage bins so that garbage trucks save time and fuel by traveling only to those that are full.

Keep emissions down… but under long-term contract

As the recent damning International Energy Agency report outlined, it’s getting ever more urgent to keep carbon emissions out of the atmosphere. This urgency is what led BlackRock Real Assets to its investment in March with Valero, bringing carbon-capture technology to pipeline systems in the US.

“We see more venture capital, growth equity and private equity and so the trick in order to decarbonise,” Florian added. “We also need to de-risk some of these investments and find infrastructure-type investors which can really weigh in with massive amounts. We’ve been looking at carbon capture for five or six years and this is the first time we’ve really found a model where we can get long-term contracts in a very traditional-looking business, a pipeline.”