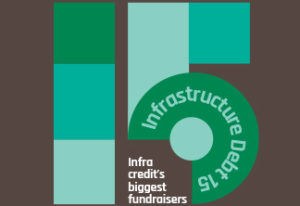 Hot on Schroders’ heels comes Vantage Infrastructure, which has raised only $37 million less than its fellow London-based manager. Most of its capital has been raised through separately managed accounts as it makes its first appearance in our debt ranking.
Vantage is the former European arm of Hastings Fund Management. It has a diverse infrastructure equity and debt portfolio with more than £2.8 billion ($3.7 billion; €3.3 billion) invested in assets across Europe, North America and Australia.

As many firms are increasingly doing, Vantage puts environmental, social and governance considerations at the heart of its investing. It’s a signatory to the Principles for Responsible Investment and a GRESB Infrastructure member. It was awarded a GRESB five-star rating and a first-place ranking within its peer group in the 2019 GRESB Infrastructure Assessment.

As senior partner Valeria Rosati told Infrastructure Investor last year: “Vantage’s participation in PRI and GRESB surveys is not driven by a thirst for third-party accolades, but a desire to deliver best-in-class client outcomes in sustainability.”

La Banque Postale Asset Management did not make the ranking last year but has increased its capital raised by almost €1.5 billion to reach €1.9 billion. It is a significant leap for the Paris-based firm and brings it comfortably inside the Infrastructure Investor Debt 15.

LBPAM European Responsible Infrastructure Debt Fund is the group’s third infrastructure fund. LBPAM applies its own ESG screening processes to investments through this vehicle, which can be made across the infrastructure spectrum.

René Kassis, head of private debt at LBPAM, told Infrastructure Investor last year that the fund would look beyond traditional renewables by investing in energy storage and electric vehicle charging infrastructure. It would also pay close attention to heating assets in the Nordics.

UBS Asset Management made the list for the first Infrastructure Investor Debt 10 and is back again, having raised marginally more capital to bring its total over the trailing five-year period to $1.8 billion.

The Zurich-based firm has made a strong start to its involvement in infrastructure debt, having only closed its first €570 million fund in 2016.

Not all of the €1 billion raised for its second debt vehicle – Archmore Infrastructure Debt Platform II – could be included in last year’s ranking due to the cut-off date, but it is included now. That fund had an initial target of €700 million and is investing in medium-sized debt opportunities across several sectors in Western Europe, primarily through direct lending on senior secured projects.

Allianz Global Investors is a major player in infrastructure debt. The Infrastructure Investor Debt 15 ranking only takes account of third-party money and shows the firm’s total capital raised over the past six years or so to be $1.4 billion, which is a decrease on the total recorded at the same point last year.

The Euro Core fund represents a branching out for Allianz, which was already managing pooled sterling vehicles alongside large separately managed accounts.

Rounding out the Debt 15 is Brookfield Asset Management. The Toronto-based firm has mainly made headlines for its much-publicised purchase of a 62 percent stake in Oaktree Capital Management for $4.7 billion. It has also been busily working towards its infrastructure debt goals, increasing its total capital raised from just under $1.2 billion in the last ranking to almost $1.3 billion. Every manager in the Infrastructure Investor Debt 15 has raised more than $1 billion.