JERA acquired 31.25 percent from GIG and 12.5 percent from EnBW, a spokesman for the Japanese company told Infrastructure Investor. Financial details of the deal were not disclosed.

According to the Formosa 3 website, the project will generate enough green energy to power the equivalent of 1.5 million-2 million homes, while displacing approximately 2,670 kilotons of CO2 emissions every year while in operation.

Under the agreement, GIG and EnBW will retain a respective 31.25 and 25 percent stake and continue to be involved in the project’s development, according to the two sellers.

GIG and EnBW intend to pursue capacity in Taiwan’s next round of grid allocations, expected in 2020. Formosa 3 achieved its Environmental Impact Assessment approval from the Taiwanese government in 2018, according to GIG.

The move marks a continuation of JERA’s and GIG’s partnership, which began when the Japanese company partnered with GIG in December 2018, by investing in Formosa 1, Taiwan’s first commercial-scale offshore wind farm with a generating capacity of 128MW.

Last October, JERA acquired a 49 percent stake in the 376MW Formosa 2 project, which is expected to become operational by the end of 2021. 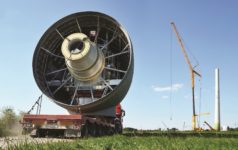