This article is sponsored by KGAL Asset Management and Denham Capital

The most abundant element in the universe is quickly taking centre stage in the fight against climate change, as the world wakes up to hydrogen’s potential to decarbonise hard-to-abate sectors including heavy transportation and industry.

Hydrogen also has a crucial role to play in providing the energy storage necessary for alleviating the intermittency of renewables. And governments everywhere are formulating hydrogen strategies to help ramp up these transformative technologies.

Meanwhile, the Inflation Reduction Act passed this year in the US is poised to accelerate the evolution of the green hydrogen industry in the country, via the introduction of a 10-year production tax credit.

Indeed, North America has the potential to be at the forefront of the global hydrogen economy, with the market expected to generate more than $140 billion per annum by 2030.

But hydrogen is still very much a nascent asset class. Production costs, the incentivisation of demand and sourcing capital are all ongoing challenges. There is also much work to be done around the associated infrastructure and the safe and efficient storage and transportation of this volatile gas. In addition, question marks exist around hydrogen’s most relevant use cases and the role of competing technologies.

Against this exciting and yet uncertain backdrop, Thomas Engelmann, head of energy transition at KGAL Investment Management, and Scott Mackin, partner and co-lead of the sustainable infrastructure team at Denham Capital, debate the future of hydrogen and its role in the race to reach net zero.

Green hydrogen’s role as a commercially viable component of the energy transition is further complicated by today’s geopolitical turmoil. High electricity prices are putting a strain on hydrogen business cases where PPAs are involved. But where green hydrogen facilities are co-located with solar or wind farms, hydrogen can be competitive with traditional fuel sources.

“In areas where solar and wind are already providing the lowest cost of energy such as Northern Sweden and Southern Spain, green hydrogen production is already starting to become cost competitive with today’s high gas prices,” says KGAL’s Thomas Engelmann. “It can also potentially be competitive with more normalised gas prices, so long as you have scale. We need to bring volume into the electrolysis market in order to bring costs down.”

Denham Capital’s Scott Mackin, meanwhile, says that renewable hydrogen is already competitive with gas in eight key European markets, and the Inflation Reduction Act is even making green hydrogen competitive with blue hydrogen in the US, a less expensive gas market. “Hydrogen is a rare example of an energy transition technology where the US is in front of Europe,” he says. “Europe led the way with renewables. The demand-pull feed-in tariff model was far more effective than the US supply-push tax-orientated model. However, with hydrogen, the US is really leading the charge.”

Power price is only one factor determining demand for hydrogen, however. Off-takers are increasingly taking a long-term view and, according to Engelmann, that is translating into three primary drivers: “The first is simply that customers are scrutinising the global carbon footprint of their suppliers. For example, the cheapest steel is that with the heaviest CO2 load, originating in China. That option is increasingly unacceptable to European clients which, in turn, is promoting growing interest in green hydrogen in the steel industry. This is a dynamic playing out across other sectors as well.”

The second driver, Engelmann says, involves independency of energy supply, the importance of which has been highlighted during the current conflict in Europe. “War in Ukraine has emphasised our reliance on fossil fuels from Russia and green hydrogen has a significant role to play in ensuring energy independence and security.”

The third involves the cost benefits of decarbonisation. “The price of CO2 is never going to come down, at least in Europe, and this is a real motivating factor,” he says. “In order to decarbonise the transportation industry, for example, we are seeing a dramatic push towards EVs. But electrification isn’t viable for the heavy transportation, shipping and aviation industries. This is where hydrogen-based e-fuels have a role to play.”

If a shipping company continues to use heavy fuels from crude oil, it will hit their balance sheets hard in the next four to five years due to fines, Engelmann explains. “I can see the same thing happening in the steel industry. At the moment, companies in Germany, for example, are being excused their CO2 payments because they would otherwise face problems with their profitability. By 2030 they will no longer be afforded these allowances, so the time to swap processes is now.” 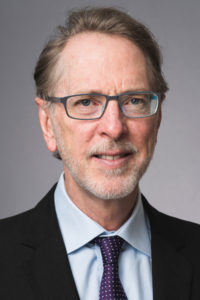 Scott Mackin
Denham Capital
Scott Mackin is partner and co-lead of sustainable infrastructure at Denham Capital. He has over 25 years’ energy experience having previously been chief executive of Covanta Energy Corporation and president of Ogden Energy. He sits on the investment and valuation committees at Denham Capital, co-leading the sustainable infrastructure team. Mackin also sits on the boards on Ceiba Energy, Endeavor Energy, Nexif Energy and Rio Energy.

Mackin agrees that heavy transportation will be one of the most important use cases for hydrogen. He is, however, more circumspect around the cement and steel manufacturing industries: “Everyone takes it for granted that these sectors will turn to hydrogen, but there are a bunch of competing technologies taking excess renewables off the grid and transforming that into industrial heat. These are proven technologies that are likely to undercut hydrogen, and in the steel and cement industries, cost really matters.”

The combined cycle gas turbine, or CCGT, manufacturing industry is another area where the role of hydrogen is exciting, but less clear cut. “CCGT manufacturers are planning for at least optionality on hydrogen, if not full conversion,” Mackin says. “Certainly, the EU Taxonomy makes it very difficult, if not impossible, to build a new CCGT reliant only on gas.”

But Engelmann finds hydrogen’s current place in the CGGT market problematic: “You produce electricity and then make 30 percent losses producing hydrogen, before running that hydrogen through a gas turbine to produce the same output that you started with. Of course, it makes sense as a method of storage and without storage the electricity sector has a major challenge ahead of it. But gas turbines need to be ready to use pure hydrogen. That is the way the market is moving.”

Meanwhile, the global opportunity set is growing. “The most attractive regions for hydrogen production are those with the lowest levelised cost of electricity,” says Engelmann, adding that the political system in a country is also important because of the critical ESG component to green hydrogen. “Australia is an interesting market because of its huge solar farms, as well as wind in some areas. Northern Sweden is an interesting market, and there is also a lot of land and opportunities in Chile,” Engelmann says.

“There are plenty of opportunities remaining in the US too, as well as an abundance of land and solar power in Africa. Namibia, for example, is developing a green hydrogen strategy. None of that means that we aren’t also looking at Europe, because, of course, the hydrogen industry isn’t only about GW-scale projects. The solar industry started out on rooftops and with small-scale projects and I believe that hydrogen is on the same journey.”

Enthusiasm from governments and demand from off-takers are being matched by cautious but growing interest from institutional investors. “We are now in a situation where governments are promoting green hydrogen, directly and indirectly,” says Mackin.

“There is also a recognition from insurance companies and pension plans that net zero really does matter and that is driving capital away from fossil fuels and towards the more sustainable economies of tomorrow. As a result, while I would have been circumspect about hydrogen two years ago and interested last year, this year, we have actually rolled up our sleeves and are digging in with two specific plays.”

But hydrogen is not a sector for the faint hearted. “You still need to be careful about managing costs and having all the contractual niceties in place, which is why, as value-add GPs we are so focused on deal execution. Do we have the right counterparties? Are contracts properly constructed? This is not an area where you should be taking merchant exposure or building things on the fly. You have to be exceptionally careful,” Mackin warns.

Hydrogen today is all about development. “There are not a lot of opportunities for buy and build,” he explains. “And that, of course, is limiting the pools of capital suitable for the sector.”

“What the market needs is a value-add strategy, which means you have to be prepared to accept risk,” says Engelmann. “Projects are all at a development stage, and so whilst hydrogen has some very interesting technologies and ESG characteristics, it is not yet suitable for a core investor looking for long durations and yield.

“The right LP for us has the capacity to invest in private equity but is also looking for strong ESG and CO2 reduction dynamics, which is not easy to access with a typical private equity product. However, if we have been successful, in five to 10 years’ time the green hydrogen projects of today will have become core.”

Credit where it’s due

Government intervention will be critical to stimulating the growth of hydrogen

Government subsidy programmes, and in particular EU feed-in tariffs, have been largely responsible for reducing the cost of wind and solar over the past two decades. The hope now, of course, is that governments will take an equally proactive stance with regards to the development of green hydrogen. Early indications are positive.

“The REPowerEU initiative and the Inflation Reduction Act in the US are going to unleash huge amounts of capital behind green hydrogen,” says Denham Capital’s Scott Mackin. “As those two markets move towards implementation, costs are inevitably going to come down.”

Indeed, the IRA includes the largest hydrogen subsidies yet to exist in the world and marks an inflection point in the arc of the technology’s development, which is why in some regions within the US, green hydrogen is already competitive with its blue and grey counterparts.

The production tax credit on offer is available for hydrogen that delivers at least a 60 percent greenhouse gas reduction relative to grey hydrogen. The higher the reduction, the higher the credit.

Meanwhile, in Europe, a repeat of the feed-in tariff model looks unlikely. “Instead, IPCEIs, or Important Projects of Common European Interest, are playing a significant role,” says KGAL’s Thomas Engelmann. “Unfortunately, IPCEIs are administrative beasts. It can take a year for developers to get through all the documentation and still they won’t know if the money is going to be available.

“Nonetheless, the IPCEIs that have been completed will certainly support the ramp-up of green hydrogen. But the problem remains that there is no real market. While there are pre-existing markets for hydrogen derivatives such as methanol for the transportation sector and ammonia, there is no liquid market currently for hydrogen itself. You have to negotiate contracts one-on-one with a counterparty and that is an inhibitor to the growth of this industry.”

However, the EU is now working on creating a green hydrogen community market with the recently announced EU Hydrogen Bank. “That sort of development could help us a lot,” says Engelmann.