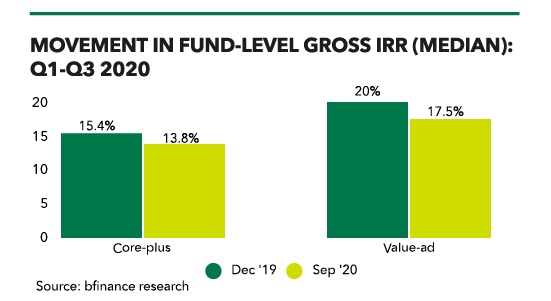 Are unlisted, closed-end GPs looking on the bright side?
In our recent ‘The Year Ahead’ Deep Dive, part of Infrastructure Investor’s Global Passport initiative, we asked Anish Butani, bfinance senior director, private markets, to model covid-19’s impact on different types of infra strategies. The results were enlightening. Using real performance data from 50 unlisted funds, Butani found that since-inception returns for core/core-plus global open-ended funds fell by 200 basis points during Q1-Q3 2020. Closed-end core-plus funds saw since-inception returns drop by 160bps for the same period, with value-add vehicles seeing returns decrease the most by 250bps. Listed infra ended up faring the best, with performance flat for the year.

During the presentation and ensuing discussion, though, a pertinent question emerged: are unlisted, closed-end managers adequately measuring covid’s impact on their portfolios? With open-ended funds highly dependent on external valuations, including for GP’s performance fees, and listed infra valued in real time, discussion centred on whether closed-end GPs were rolling valuations forward or adequately testing them against external benchmarks.

No one had a definitive answer, but a disconnect was noted between listed and unlisted valuations, with airports providing a good example.

So, are unlisted, closed-end GPs looking on the bright side? That is for managers to know and their LPs to find out, we’d say.

Greenfield – a valuations minefield
Someone though, has already begun that job. Infamous in the private equity world, financial economics professor Ludovic Phalippou has turned his attention to infrastructure returns and valuations in a podcast with Matteo Botto Poala, managing director of infrastructure at Goldman Sachs.

Poala stressed that infra valuations are based on predictable cashflows. However, it can be much harder to price this when it comes to greenfield assets. Case in point? UK-based CityFibre, bought by Goldman and Antin in a £538 million ($733.8 million; €603.3 million) take-private deal in April 2018 at a 40 percent premium.

While CityFibre was London-listed, its business model of building virtually non-existent fibre connections meant its EBITDA was “close to zero”. That means a valuation based solely on the opportunity, Poala said, leading to “pretty robust discussions” at Goldman HQ.

So, how did that pan out?

“It wasn’t an easy discussion, but the committee recognised the value of the opportunity. We were proven right and the opportunity was even larger than we anticipated,” Poala said.

Infra’s liquid strength
You might think that even the glass half-full community would struggle to find a positive spin on the past nine months or so for airports. Yet that was precisely the case at our annual debt roundtable, held last week and to be published alongside our March issue.

As one participant observed, it was surprising just how much liquidity was present in infrastructure assets compared to other asset classes. Airports highlighted the role liquidity played in fighting the effects of covid disruption.

“The fact you can have an airport that’s closed for a fairly substantive period of time is testament to the structure and liquidity available, and ultimately, shareholder support. You have situations in real estate where you don’t know what’s happening from one month to the next,” one of the participants said.

Perhaps that glass is more than half-full, then.

Handle with care
Healthcare assets have come under the infrastructure microscope over the past year as both a potential reputational risk and a sector in need of more investment, although a new report suggests existing operators are already feeling the pinch.

The value of assets for care of older people in residential settings in the UK fell from £17.3 billion in March 2020 to £16.6 billion in September 2020, according to a report from healthcare research provider LaingBuisson. Occupancy levels have fallen by 8 percent over the period and the sector is not expected to return to pre-covid levels until 2023, it warned.

Speaking at a LaingBuisson online event alongside the report, the Times reported James Tugendhat, chief executive of the private equity-owned care home provider HC-One, said admissions at some of the company’s homes had fallen by more than 50 percent, with deaths and families unwilling or unable to admit new occupants a cause for the decline.

“Hydrogen has lots of connotations, there are lots of safety issues; some older people remember the Hindenburg… so there is a job to persuade people that this is safe.”

Digital Colony fortifies European outpost
The Florida-based digital infrastructure investment arm of Colony Capital is beefing up its presence in Europe with the hire of Latifa Tefridj-Gaillard as managing director and head of Europe capital formation.

Tefridj-Gaillard, who will be based in London, previously spent 15 years at Goldman Sachs, most recently as head of UK institutions solutions sales. In her new role at Digital Colony, she “will be responsible for building and maintaining strong relationships” with European LPs, according to a statement.

She will immediately have her hands full, with the group currently seeking $6 billion for Digital Colony Partners II, which was launched towards the end of last year following the 2019 close of its first digital infra fund.

A spokeswoman for Digital Colony told The Pipeline: “We are expanding our footprint in Europe, deploying capital and expanding our relationships with LPs in equity and credit.”

A is for Aument at AECOM
Jennifer Aument, a well-known executive in the North American transportation scene, has left her position as president of Transurban’s North American division to join infrastructure consulting firm AECOM. Pierce Coffee, vice-president of customer experience and operations, and an 11-year Transurban veteran, will replace her as president.

As chief executive of global transportation, Aument’s assignment is to create sustainable and cost-effective innovations in project development and management. Her new gig comes ahead of what is expected to be a strong push by US political leaders to pass large-scale funding for infrastructure improvements.

With Aument “among those who pioneered” PPPs for major transport projects in the US, according to Transurban, perhaps Mayor Pete might want a word? 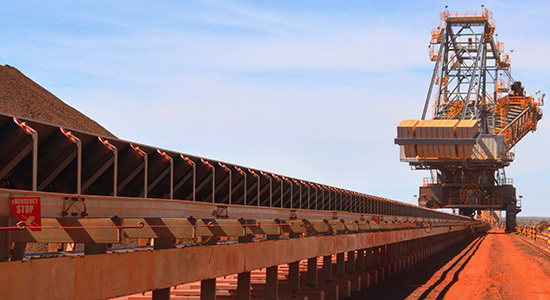 The firm, which agreed the deal in December, announced last week that it will commit up to A$500 million ($382.7 million; €314.2 million) to develop new assets for the sector, including new solutions to use liquefied natural gas instead of diesel in heavy mine haul vehicles and “re-deployable solar solutions which can adapt with the unique requirements of mining operations with shorter mine lives”, CEFA said in a statement.

Its first major project will be the construction of the Mid-West LNG Hub. The facility will produce up to 100,000 tonnes of LNG per year for power generation, another focus of the partnership, with plans in place to build further hubs.