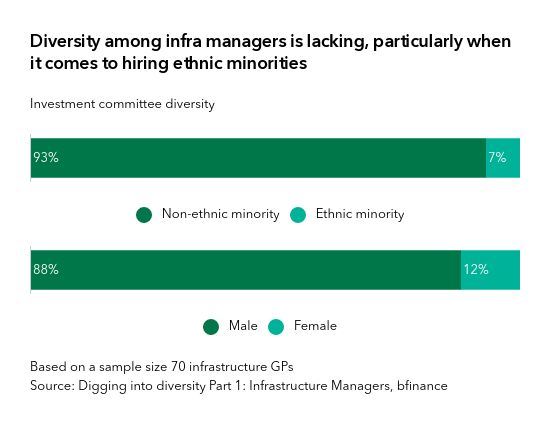 As the focus on environmental, social and governance continues to intensify, diversity remains “an afterthought in the broader ESG picture, buried within the ‘G’ or ‘S’ criteria”, investment consultancy bfinance finds in a recent report.

Analysing 70 infrastructure managers, for which bfinance now includes a diversity analysis, it found that more progress has been made within gender versus ethnicity. Some 15 percent of the GPs have a female portfolio manager and only 5 percent have an ethnic minority portfolio manager. At the senior team level, 17 percent are women, but only 12 percent represent an ethnic minority. At the investment committee level, those percentages are lower at 12 and 7 percent, respectively.

The firm also found box-ticking to be “endemic”. Presumptions should be avoided, it warns, noting that “diversity policies do not necessarily translate into effective practices [and] team diversity doesn’t necessarily mean stronger consideration for diversity in the investment process”.

Therefore, bfinance recommends investors develop a “clearly articulated philosophy” on why diversity matters. Hopefully, that will help transform this from endemic box-ticking.

No toll trouble Down Under

Crisis, what crisis? Two pieces of news from the toll roads sector last week show that there is still life left in this troubled sector.

First, Australia-listed firm Transurban told shareholders that it had sold a 50 percent interest in its US assets – all located around DC – to AustralianSuper, Canada Pension Plan Investment Board and UniSuper for A$2.8 billion ($2.1 billion; €1.7 billion).

The parties are all familiar bedfellows: UniSuper is a major shareholder of Transurban itself, while AustralianSuper and CPPIB were part of the Sydney Transport Partners consortium led by Transurban that secured a 51 percent stake in Sydney’s WestConnex toll road project for A$9.26 billion in 2018.

Now, the New South Wales government is preparing to sell the other 49 percent of WestConnex in two separate auctions of 24.5 percent each, according to the Australian Financial Review (paywall).

Transurban chief executive Scott Charlton told shareholders that the US sales would enable “accelerated growth” in North America and Australia, where it sees “a number of opportunities starting to materialise”.

One of these opportunities might well be the other half of WestConnex – an auction set to be a useful temperature gauge for the toll roads market.

Ain’t no sunshine for solar lenders in France

Last month, we brought you news of the French government’s plans to retroactively cut the feed-in tariff for solar assets built between 2006 and 2010, set to save the public purse about €300 million per year after the government denounced the subsidies as “excessive profitability”.

Needless to say, the industry is not happy, although as one advisor told The Pipeline, the anger is much more limited among equity holders at this stage, in part due to the fact this is yet to display an impact and the overwhelming focus by investors on past performance, rather than more forward-looking aspects.

The other factor, the source explained, is many of those assets in France took advantage of a highly liquid debt environment and, in several cases, are 95 percent leveraged, heaping pressure on the banks. It will be French lenders who will now be taking exception to the “excessive profitability” accusation.

Stay at home and vote!

Our annual awards remain open for voting and this is not a poll you have to leave home for, so click here to get started. You have until 11:30pm PT, Friday 8 January 2021.

A quick reminder of the rules: you cannot vote for yourself or your firm (that goes for portfolio companies too); you can only vote once; you do not need to vote in all categories; and of course, it’s a secret ballot.

“Demand for aviation will recover from covid-19 and the additional capacity at an expanded Heathrow will allow Britain to compete for trade and win against our rivals in France and Germany.”

A bullish Heathrow Airport sets out its stall after the UK’s Supreme Court overturned a ban on its third runway.

Ardian hires from Goldman for new US MD role

French GP Ardian is beefing up its North American team with the addition of Michael Obhof for the newly created position of managing director for the US. Based in New York, Obhof joins from Goldman Sachs’ infrastructure team, where he’s spent the past seven years, and brings extensive experience in managing assets across the transport, energy and telecom sectors. At Ardian, he will be responsible for identifying new investments and running existing ones within the Ardian Americas Infrastructure Fund IV portfolio. Ardian’s infrastructure business in the region is co-headed by Stefano Mion and Mark Voccola.

The French manager’s Americas infrastructure portfolio has been growing, adding assets to its US-focused Skyline Renewables platform and establishing a battery storage partnership in Canada with Enel-X, the fifth asset of the $800 million fund.

When Norway’s Storebrand Asset Management last month became a shareholder in AIP Management and the AIP Infrastructure II fund alongside Danish LPs PKA and PenSam, it told us it was “looking for the right partner”.

The Swiss investment is set to propel AIP Infrastructure II towards its €4 billion target, AIP stated. For its part, the Swiss were attracted by the prospect of “sustainable infrastructure assets, while optimising management costs”, Jean-Christophe Van Tilborgh, head of investments at Retraites Populaires, said in a statement.

Any “optimising of management costs” will make the fund Populaires indeed. 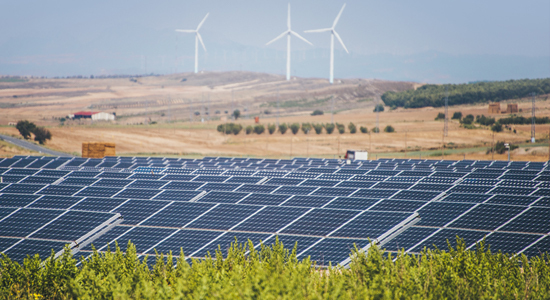 In less than four years, I Squared Capital has purchased and expanded European renewable energy platform Grupo T-Solar and has now offloaded the company in a €1.5 billion deal.

The US-based firm announced the agreement this week with Cubico Sustainable Investments, a renewables joint venture between Canadian duo Ontario Teachers’ Pension Plan and PSP Investments. The deal nets Cubico a 274MW operating capacity, with a heavy presence in Spain and 1.4GW of projects in the pipeline. It also reportedly nets I Squared a truly value-add 40 percent IRR, per Bloomberg.

I Squared has been shuffling its strategy in 2020, with its third flagship fundraise on its way towards meeting its $12 billion target, as well as a new debt strategy getting off the ground. Earlier this month, the firm also added two cloud services companies to its Asian digital infrastructure platform, investing through ISQ Global Infrastructure Fund II.