Fossil fuel prices have soared in the wake of Russia’s invasion of Ukraine, threatening a cost-of-living crisis in Europe and exposing the West’s dependence on Russian gas. Since the 1990s, imports of Russian gas to Western Europe have risen by 60 percent. In 2021, they amounted to 155 billion cubic metres – 40 percent of total gas imports, according to data by researcher BTU Analytics.

The scale of this dependence has shone a light on both energy security and renewable energy sources. These two issues are inexorably intertwined, but, according to Tom Williams, partner and head of energy and infrastructure at investment manager Downing, their close interconnection has been forgotten in recent years.

“I first started talking to people seriously about investing in renewables in Europe back in 2010,” says Williams. “In those days, one of the key reasons to invest in renewables, and one of the reasons why governments should shift their policies towards renewables, was energy security. But that has been a bit drowned out in the intervening period by a wave of discussion around the climate crisis.”

It is a view shared by some of the most senior figures in the energy industry. Speaking at an energy conference last month, Claudio Descalzi, chief executive of Italian energy giant Eni, said of Europe: “We don’t have our own energy… and we never thought about a strategy for energy security.”

The amount in cubic metres of LNG the US is looking to send to the EU, with the annual amount rising to 50bn by 2030

It is hard not to conclude that Russian President Vladimir Putin timed his assault on Ukraine to catch the West at a moment of weakness – when dependence on Russian gas is high, but renewable energy sources are insufficient to meet demand. One could argue that the invasion of Ukraine has turned energy policy into an economic weapon.

“Putin may be many things,” says Williams, “but he is not stupid. I think this has been calculated and the timing is not a coincidence.”

On the surface, the demands for security and decarbonisation both strengthen the case for renewables. But, faced with a fast-moving geopolitical crisis, can Europe achieve the transition to renewables fast enough to make a difference? And will renewables be sufficient to eliminate or reduce the continent’s reliance on Russian gas?

A tailwind for renewables

In the long run, there is no doubt that renewables are the key to energy security. Talking to renewable energy infrastructure investors about the crisis in Ukraine, the term ‘acceleration’ comes up repeatedly.

“There is a clear refocus on the green energy transition accelerating the move away from fossil fuels to renewables,” says Hamish Mackenzie, head of infrastructure at DWS. Meanwhile, Luke Hyde-Smith, Waverton Investment Management’s director and co-head of multi-asset strategies, and the lead manager of the Waverton Real Assets Fund, says: “This has accelerated some existing trends. I think one of those will be an increased investment in renewables, certainly within Europe. How else are we going to wean off Russian-supplied gas and oil?”

As the surging price of fossil fuels makes renewables more competitive, the business case for investing in sustainable energy is becoming far more favourable. Shifting government policies across Europe have already made clear an acceleration towards alternative sources of energy.

In February, just four days after Putin launched the invasion of Ukraine, it was reported that Germany was aiming to source 80 percent of its energy from wind and solar by 2030 and become 100 percent renewable by 2035. In the context of the ongoing Ukraine war, however, these deadlines do little to address the immediate pressure to become free of Russian gas.

According to Hyde-Smith, the war in Ukraine has highlighted a wider mismatch between global energy supply and demand. “There has been significant underinvestment in the supply of traditional resources, and that has come up against a pretty robust global economy with increased demand. What I think we are going to see coming out of this is not just more investment in renewables but more investment in energy, full stop.”

For some, this has renewed the debate over nuclear energy and whether it can or should be included under the umbrella of ‘renewables’. The UK government has made clear that it plans to expand nuclear-generating capacity. Hyde-Smith, Mackenzie and Williams all regard nuclear as a key component in providing the baseload capacity to meet demand when renewables are not available.

“There are very significant constraints with the transmission of gas out of the Iberian Peninsula. There are just some physical problems that can’t be overcome quickly enough”

However, the typical timescale for the construction of a nuclear power plant is about seven years, according to data by Statista. The UK’s experience with Hinkley Point C is testament to the long timelines involved.

Such long timelines mean that, as with solar and wind, nuclear cannot conceivably replace Russian fossil fuel consumption in the near term. Ultimately, the debate over nuclear energy’s long-term role in renewables remains as vexed as ever, but in some markets, notably in Germany, the issue is more short term.

The planned decommissioning of Germany’s nuclear capacity, enacted by Chancellor Angela Merkel’s government in the wake of the Fukushima disaster in Japan, has been blamed for making Germany even more dependent on Russian fossil fuels. Germany has three nuclear plants in operation that are due to close this year. As events in Ukraine unfolded, the idea was mooted that these plants should be kept in operation to help bridge the gap to renewables and wean Germany off Russian gas.

However, Germany’s government decided that the plants’ lifetime would not be extended. Instead, Germany is looking to liquefied natural gas that can be imported from around the world.

LNG: A bridge to renewables

Tanker shipments of LNG provide access to global gas markets and reduce dependence on nearby gas producers. Potential sources for LNG include Middle Eastern states such as Qatar and other markets further afield, such as Australia. But LNG imports require investment in infrastructure to offload, store and connect LNG to existing gas distribution networks.

In March, energy groups Gasunie and RWE signed an agreement with the German government to construct an LNG import terminal at the North Sea port of Brunsbüttel. The terminal is expected to be operational within two years, and further LNG facilities are expected to be agreed. The annual capacity of the terminal – 8 billion cubic metres – is not sufficient to replace the 50 billion cubic metres the country currently imports from Russia, though it will make a noticeable dent.

To increase LNG use in Northern Europe even further would require the construction of multiple LNG terminals because of a lack of pipeline capacity to other terminals in Europe, as Williams at Downing explains. “A lot of the terminals are on the Atlantic coast, Spain and Portugal, for obvious reasons of being internationally accessible,” he says. “But there are very significant constraints with the transmission of gas out of the Iberian Peninsula. There are just some physical problems that can’t be overcome quickly enough.”

Williams also points out that, while a move to greater LNG use in Europe may contribute to weaning the continent off Russian gas, it will do little to reduce the spiralling costs of energy for European businesses and consumers. “You end up in a global competition for LNG,” he says. “That comes with an increased price tag.”

Nevertheless, LNG is seen as a vital component in reshaping European energy use, as evidenced by the recent LNG deal between the US and EU. Under the deal, the US will initially supply an additional 15 billion cubic metres of LNG to EU states – a figure the White House said would rise to 50 billion cubic metres per year by 2030.

As part of the effort to supply Europe with non-Russian gas, US President Joe Biden has also called for increased LNG export capacity to be built on America’s Gulf Coast. At the same time, public discontent at rising fuel prices in the US means the administration is under pressure to permit more fracking domestically, according to Teller Report. Biden’s public statements and the pressure to unleash US fossil fuel production are beginning to make environmental campaigners nervous that the expected Biden green agenda may be under threat.

In this instance, rather than simply driving the renewable agenda, the energy squeeze may yet spur an increase in some fossil fuel investment, too.

Whether or not that does happen in the near term, the Russian invasion of Ukraine has made the importance of renewable infrastructure clearer than ever. Few doubt that recent events will drive faster and more extensive investment in solar, wind and, in some markets, nuclear energy.

The timeline for decarbonisation is long, however, particularly when compared to the speed of the invasion of Ukraine and the rapid geopolitical reassessment it has prompted. The immediate urgency of energy security and a longer-term desire to have more energy options suggests there are also quite a few unknowns ahead. 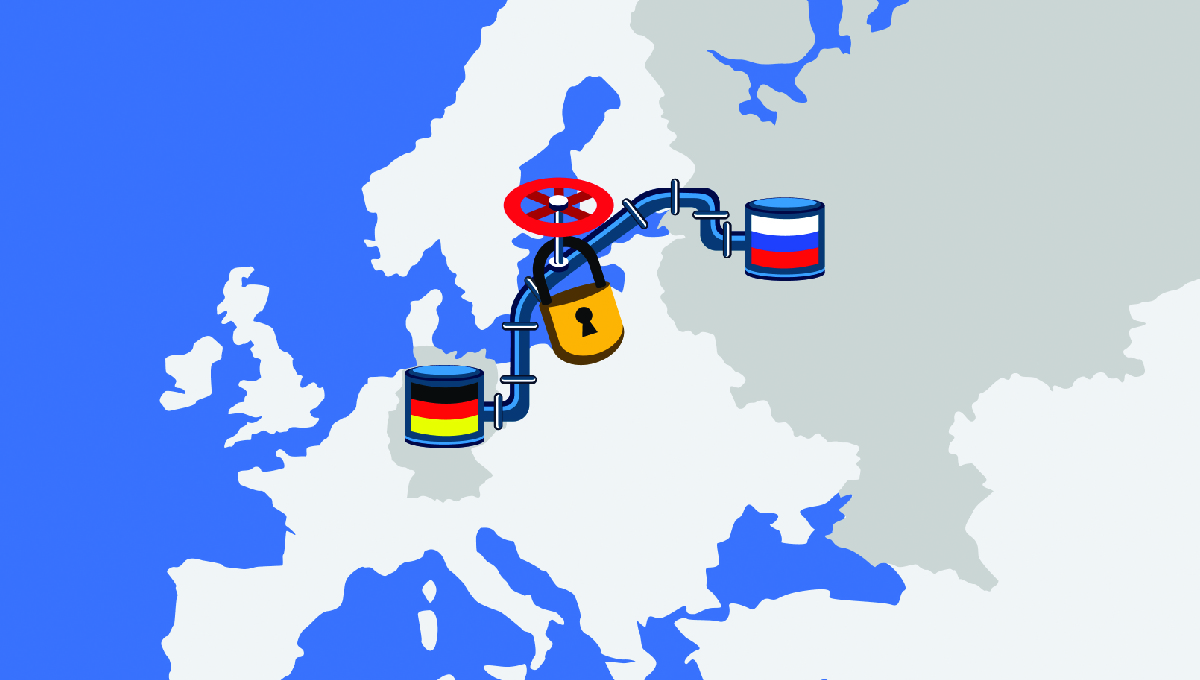 Getting gas to Europe

Initially, investment in LNG will do little to reduce carbon emissions or wean developed economies off fossil fuels. But there may be potential for LNG infrastructure to have a greener future by being repurposed for hydrogen. This prospect is being investigated by RWE as part of its development of the Brunsbüttel LNG terminal in Germany.

How significant a role hydrogen can and will play in a low-carbon global economy is still much debated, although one issue – whether hydrogen can ever be cheaper than fossil fuels – may require recalculation in the face of soaring oil and gas prices.

While LNG infrastructure may have a post-carbon future, the prospects for one major piece of gas infrastructure, Nord Stream 2, are looking less promising. The $11 billion transcontinental pipeline connecting Russian gas supplies to Northern Europe was one of the first infrastructure projects to be stymied by the war in Ukraine as Germany withdrew its support. Shell has ended its involvement in the project, while another energy group, Wintershall Dea, has written off its $1.1 billion investment in the project, as reported in the Wall Street Journal.

The long-term future of Nord Stream 2 remains deeply uncertain. “At the moment, the market consultants are assuming that Nord Stream 2 does come online at some time in the future,” says Downing’s Williams. Waverton’s Luke Hyde-Smith agrees there might be a future for Nord Stream 2, but if it does become operational it may carry only a fraction of the volumes originally anticipated.

Ultimately, the use and therefore the value of the Nord Stream 2 pipeline will depend on when, if ever, relations between Russia and Western Europe recover. Even if Russian gas becomes once again politically acceptable, the volume of gas that will be pumped will depend on how much Europe has already moved to new energy sources.