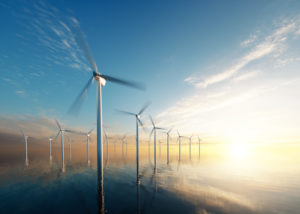 At various junctures over the past nine years, it’s often been enjoyable to recall the remarks then BP chief executive Mike Petrucci made to the Financial Times on closing the oil company’s alternative energy division.

“Over the last six months, we have realised that we simply can’t make any money from solar. It has become a commoditised business,” Petrucci said in December 2011.

Much of the fun has come from pointing to the general success of the renewables industry since that unfortunate remark. But Petrucci’s comments once again came to mind two weeks ago when BP announced its first major deal since revealing its 50GW by 2030 renewables ambitions in August.

Its $1.1 billion investment in two US offshore wind sites being developed by fellow oil major Equinor was notable not only for the size of the ticket but also the statement made through the investment. While US offshore wind development activity has gained more momentum in the past 18 months or so, this is not a market offering any guarantees of success. Even before getting to construction, the development stage remains lengthy, complex and, to some, off-putting, meaning this industry still lags other markets in the world. Yet BP’s deal with Equinor included developing existing offshore wind leases on the East Coast, while also jointly further pursuing other opportunities, with nominal capacity currently at 4.4GW.

Of course, one can count on one hand the players in the infrastructure investment industry who would see this particular move as a threat. BP is taking development risks that few others have interest in doing so. However, it is as much a statement as it is a direction of travel. BP’s renewables ambitions will see it become a key part of the energy transition fabric and for all the talk of declining profits – $16.8 billion in Q2 alone, to be precise – it still has deep pockets to invest from, and is bullish on the competition surrounding the industry.

“Returns on alternative [energy] are obviously something that people are quite worried about – we’re not,” chief financial officer Murray Auchincloss told investors in August. “If you’re in big public auctions for wind there’s a wall of cash coming at it, and you’ll probably see people bidding at around 5-6 percent returns.

“By the time you stick a power-purchase agreement on that, by the time you lever it – because there’s so much debt that’s willing to do these things – you’re up into the 8-10 percent range. And that’s probably what everybody inside the market would see. We think we can do things differently.”

Its US offshore wind bet already gives an indication of how BP will do things differently. But you don’t need to be a gambling man to bet we’ll be hearing more about the oil giant’s energy transition moves in the months and years to come.