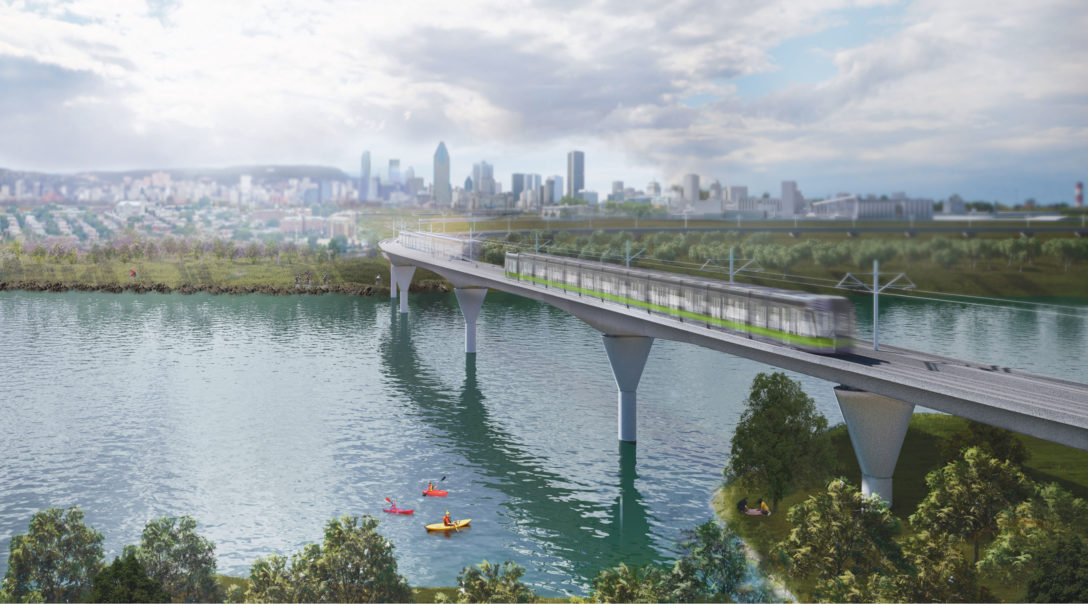 Public pension funds manage some of the largest pools of capital in the world. As financial markets mature, so do these institutions’ investment programmes.

In infrastructure, the best example of this may be the light rail project that Caisse de dépôt et placement du Québec is building from scratch.

CDPQ Infra, the infrastructure investment arm of the C$326.7 billion ($245 billion; €224 billion) pension, has taken on what the provincial and federal authorities have billed as Quebec’s largest public transit project in half a century: the Réseau Express Métropolitain, an extension of Montreal’s transport service that promises to streamline how people navigate Canada’s second-largest city.

With a C$6.3 billion price tag, the greenfield development will feature 42 miles (67km) of rail lines crossing Montreal. The tracks will go above and below ground, underwater and through the iconic Mt Royal after which the city takes its name. CDPQ Infra plans to build 26 REM stations that will be integrated into Montreal’s existing metro and bus systems. The aim is to significantly cut commute times and, for the first time, provide a light rail service to Montreal- Trudeau Airport.

Macky Tall, chief executive of CDPQ Infra, tells Infrastructure Investor the REM is designed to have a “very significant structuring impact” on mobility around Montreal. “The logistics of it are at the high end of complexity but very manageable at the same time,” he explains.

That’s confidence for a first-time developer. The project CDPQ has taken on would be a tall order for any investor building projects from the ground up. But for a pension fund to lead the development is something of a novelty.

Canadian pension funds have been market leaders when it comes to infrastructure. They were among the first institutions to back the asset class in the 1990s and have been at the forefront of sourcing their own transactions.

But greenfield investing “requires a different skillset,” according to Kelly DePonte, a managing director at placement agent Probitas Partners.

“If you’ve been an investor in funds, and then you’ve been actively co-investing alongside GPs, you can get yourself trained up to do brownfield investing,” he says. “It’s fairly straightforward. But greenfield is an entirely different due diligence process.”

The risks CDPQ faces in developing the REM range from securing planning permission to building the light rail on time and on budget. And, of course, the REM then has to make money. If CDPQ is to be successful, the development will be in the details.

CDPQ Infra is designing the REM to be transformative for Montreal.

“People understand that, if we succeed, it contributes to them personally”

Plans for the project, which broke ground in April 2018, include sleek lightrail cars speeding through downtown. Tall says two of the REM’s most important selling points were the ability to deliver passengers from the city’s centre to the airport in approximately 20 minutes, every 10-15 minutes, and a pledge to cut the commute time between Université de Montréal and McGill University from 30 minutes to three.

That sort of impact on mobility has won buy-in from both the provincial and federal governments.

CDPQ is funding nearly half of the project with a C$2.95 billion equity check. The Quebec government has provided a C$1.28 billion subordinated equity investment. It is also providing C$512 million on behalf of municipalities that will benefit economically from the REM, while utility Hydro-Quebec is providing C$295 million to cover water and electricity costs.

At the federal level, the Canada Infrastructure Bank, a development agency launched in 2018, has provided a C$1.28 billion 15-year loan. The REM is the first project CIB has supported. Pierre Lavallée, the agency’s chief executive, says the way the REM is being funded “sets an example” for how future large-scale projects in Canada might be paid for.

“If you look at the capital structure, we’ve ensured that there’s a proper risk allocation to the equity commitment, which creates a strong alignment between the public and private sectors,” Lavallée tells Infrastructure Investor. “We hope this model will be replicated in other parts of the country, in urban transit and in other infrastructure sectors.”

What makes the REM model so innovative, Tall explains, is a “virtuous circle” of collaboration between CDPQ Infra and the Quebec government. The province’s investment allows it to take a portion of the REM’s return, but CDPQ Infra is the party holding all the risk.

“If it is successful, they share in the upside, but they’re not exposed to the downside,” Tall says.

Another unique factor is that CDPQ, a pension fund, is paying for and will own the project.

“We’re using people’s savings to develop a project that will improve the daily life of people living in Quebec,” Tall says. “When they use the REM, they’re not only getting a good service, they’re contributing to their own pension fund.”

CDPQ Infra’s return, which Tall expects to be between 8 and 9 percent unlevered, will be generated from the REM’s revenue. Under a 99-year fixed-rate contract, CDPQ Infra will receive C$0.72 per kilometre per passenger index-linked to inflation. “People understand that, if we succeed, it contributes to them personally,” Tall says.

Emmanuel Jaclot, who heads the infrastructure group at CDPQ, calls the pension fund’s move into greenfield development both a “big bet” and a “logical next step” for the investment programme.

CDPQ began managing its own investments in the asset class in 1999, when it committed C$250 million alongside other partners to acquire Highway 407 in Ontario. Since then, the pension fund has built a C$23 billion portfolio, with holdings in companies, such as wind farm developer Invenergy, that handle greenfield projects as well.

“But with greenfield projects, it’s not full-steam ahead from day one. You invest money and have to wait for construction and ramp up”

According to Jaclot, as the global infrastructure market becomes more competitive, greenfield is becoming a core part of how CDPQ Infra plans to capture value in its investments.

“We discovered infrastructure, learned how the asset class works, saw the returns it generates, and we developed confidence,” Jaclot tells Infrastructure Investor. “Now, we can move one step ahead. But with greenfield projects, it’s not full-steam ahead from day one. You invest money very gradually through the development phase and have to wait for construction and ramp up. CDPQ is large enough and long-term enough to allow for this kind of time horizon.”

Lavallée, who previously served as global head of investment partnerships at Canada Pension Plan Investment Board, says CDPQ has essentially launched a “new business line” that will create a differentiated dealflow for itself when compared with other investors.

“It’s only natural as an infrastructure investor to look to where else you can apply your expertise and knowledge to generate better returns,” he explains.

Think outside the box

For developments on the scale of the REM, real expertise will certainly be needed. There are three main risks that a greenfield investor has to account for to ensure a project’s success.

The first is what is known as development risk, which includes sorting through permitting for new construction and making sure environmental standards will be met. According to Tall, detailed planning, forecasting and collaboration with public and private stakeholders are the best ways to reduce this risk.

“With every development, you’re investing a lot of time, money and energy without certainty that the project will be successful,” he explains. “You have to find technical solutions to problems that may arise.”

In the case of the REM, one example he gives was CDPQ Infra’s decision to convert an existing commuter line dug through Mt Royal into a light-rail corridor that will support the service to the city’s airport.

“For over 30 years, transit authorities studied ways to connect service to the airport in the west part of Montreal,” he says. “We broke the back of that constraint by transforming the existing commuter line running under the mountain.”

The next risk developers must account for is construction risk, the seemingly infinite amount of ways in which building a project can go wrong. However, according to Marc Chiasson, vice-president of PCL Construction’s civil infrastructure business in Canada, a developer can tell within the first 30 percent of a project if costs are going to get out of hand. “If a project goes bad, it’s usually within the early portion of development, because the design is upfront,” he says. “When a project is challenged, the tendency is not to recognise the problem’s impact as early as reality is telling you.”

And when there are over-runs – especially in lump-sum public-private partnerships, where a government pays the private developer the public sector’s entire portion of the project upfront – additional costs hit the consortium directly.

“The owners of these projects will hopefully start to recognise that they carry significant risks,” Chiasson explains. “As those risks are pushed on to construction companies, we’re starting to see contractors not want to participate in the game anymore.”

This is exactly what happened to SNC-Lavalin, the general contractor CDPQ has hired to build the REM. SNC-Lavalin blamed cost over-runs on large infrastructure PPPs for C$367.6 million in negative cashflows during the second quarter of this year. This led the company’s interim president, Ian Edwards, to say it would “stop all lump-sum turnkey contracting”.

SNC-Lavalin’s decision followed that of another major construction company, Sweden’s Skanska Group, which said it would stop bidding for mega-PPPs in the US after it wrote down SKr 900 million ($92.9 million; €83.8 million) related to the construction phases of two such schemes.

“These companies have had to learn painful lessons,” says Chiasson. “When you have significant losses on projects and you don’t see that the risk allocation is changing from the owner’s perspective, why continue going down the same road?”

But Christophe Petit, president of Star America Infrastructure Partners, a firm specialising in greenfield projects, says the real uncertainty lies in revenue risk: how the project performs after it has been built.

“A lot of time, the focus with greenfield is on construction risk, managing the building process,” he says. “Buying an existing asset means you already have some track record of how the asset has been performing. But when you build a new rail line or toll road, you don’t necessarily have a profile of how people are going to use it.”

The first branch of the REM is scheduled to begin service in 2020 and become fully operational three years later. However, with a team of development experts now on the staff, CDPQ Infra is already planning its next project.

The Canadian investor has formed a partnership with NZ Super, a NZ$43 billion ($27.0 billion; €24.6 billion) superannuation fund in New Zealand, which has been shortlisted in the tender to develop a light-rail project in Auckland. The project will consist of two lines, one linking the downtown area to the airport and the other linking downtown to the north-west of the city. “We went into greenfield investing saying, ‘we can’t do this just a little bit’,” Jaclot explains. “Clearly, we’re looking for more projects. The ambition we have is to be developing several projects at the same time.”

A final decision on whether CDPQ Infra will secure its next development will come next year, around the time that the first phase of the REM has opened. We will know then whether CDPQ’s big bet on light-rail is starting to pay off.