This article is sponsored by Cube Infrastructure Managers

How has Cube’s digital infrastructure strategy evolved over the years?

Stéphane Calas: We try to position ourselves as early movers within infrastructure markets with the highest value creation potential. We focus on investing in small and mid-cap operators at an early stage of development. This is what has driven our historical performance so far.

As an example, we invested in 2008 in IslaLink, one of the first independent submarine cables. We supported the growth of that business for six years before selling it to a larger fund. Another example is Covage, one of the first neutral fibre-to-the-premises operators in Europe. Covage operates open access fibre networks in rural and semi-dense areas across France, typically with long-term concession contracts with local authorities. We backed the company in 2011, when it had revenues of between €20 million and €25 million. We exited last year at a valuation of over €1 billion.

We avoid the fierce competition that the most coveted assets can generate in auction processes, targeting instead smaller platforms at an earlier stage of their development and in new sub-asset classes. We are now reaping the rewards of that early positioning thanks to the good exit valuations that digital infra is attracting today.

The first Cube fund is in exit mode, but the second is currently being invested. So, what types of opportunity are you targeting now?

We seek to stay away from the crowd and ahead of the curve by moving to new geographies, targeting smaller assets and expanding into adjacent and less mature segments.

More recent deals include dstelecom, a Portuguese fibre operator similar to Covage, but in a smaller country, where it enjoys full ownership of the fibre network and where we have welcomed all four internet service providers. Positioned as a neutral operator, this company owns the only viable fibre network in its regions, under evergreen concessions, and it very much reflects our approach of investing outside the radar of our peers in order to maintain future returns for our LPs.

How does your 2018 investment in central London fibre business G.Network fit with the strategy of targeting opportunities in underserved rural markets?

Sean Williams: London is clearly a large and affluent market, but it’s also one that, for historical reasons, has very poor broadband. That’s because of a decision BT made more than 10 years ago, to deploy fibre-to-the-cabinet
rather than fibre-to-the-premises. BT has obviously now begun its fibre-to-the-premises roll-out in earnest – at a rate of around two million premises a year – but it targets areas where it can reuse its own infrastructure, which is not the case in central London. We’re going after the opportunity in London while BT is prioritising elsewhere.

But how do you counter competition from other alt nets?

SW: That first-mover advantage is crucial. We aim to be the first to construct networks to the premises in the streets we build and, as soon as we deploy there, connect to the network and start to recruit customers, so the incentive for any other network operator to build in the same place is massively reduced.

Secondly, I would point to our strategy of becoming an open access network. We’ve already signed some long-term contracts and we’re in active discussions with all the key players. That will make us ‘the’ strategic open access network in central London, which undermines the case for anyone else – whether that is BT or other alt nets – to come into our area. Again, it gives us a privileged first mover position. We will have succeeded once we have gained the trust of all major telecom operators in central London; that is how we can be sure we are constructing a long-term asset.

How has the business been impacted by the pandemic?

SW: Covid has been a disaster for many people’s lives and businesses, and we’ve had some ups and downs in our own journey. But while there have been challenges, there have also been opportunities.

On the network side, local authorities have been more sensitive about noise because of people working and learning from home. That’s required us to incur more cost, because we’ve needed to put sound barriers around our construction sites and limit our work hours. On the other hand, the streets of London have been deserted, which has given us the chance to build networks in streets where it would normally be nigh on impossible. That’s been a real upside. Meanwhile, from a market perspective, it’s been more difficult to recruit business customers, because business premises have been closed. On the other hand, residential demand has been strong because everyone has been relying on home broadband and realising they need fibre.

Of course, connecting was difficult, particularly at the height of the pandemic. No one wanted engineers in their homes. But now that the pandemic is easing, at least in the UK, we’re catching up on those connections. So, while there have been challenges, overall, we’ve been extremely lucky.

What are your plans for the business from this point on?

SC: When we first invested in G.Network, the company was operating in the fibre-to-the-office space only. It has now shifted to also address the larger fibre-to-the-home segment. The next step, as Sean alluded to, is to move to an open access model. The company currently operates as a vertically integrated telecoms operator, providing the infrastructure layer, but also the services around that. In the future, a growing share of business will come from granting the network to other internet service providers. By sharing the infrastructure, we will be creating stronger barriers to entry.

SW: The other big development is deployment. We are on a journey from a few hundred thousand premises passed to 1.3 million over the next three years. That is a massive transformation and we have to make sure we do that to the highest standard.

SC: Absolutely. It is the combination of a strategic shift in the business model, together with a shift in scale. That has been made possible by an important milestone reached last year – a debt and equity fundraising of up to £1 billion ($1.4 billion; €1.2 billion) to support the future growth of the network, including an equity investment of close to £300 million from USS. 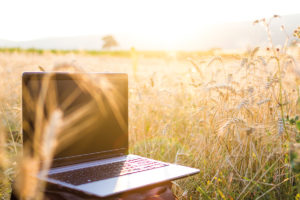 Alongside its investment in urban fibre deployment, Cube is also active in developing rural fibre networks, through its investment in dstelecom. “dstelecom was born in 2008, with the aim of building a fibre optic backbone connecting 11 municipalities in the north of Portugal,” says Ricardo Salgado.

The ambition is to help bridge the digital divide between urban and rural communities. “Our goal is to root people, attract investment and create opportunities in sparsely populated regions,” Salgado says. “The importance of doing this has only become more critical with the restrictions created by the pandemic.”

dstelecom owns and operates both the active and passive layers of the network with a wholesale-only business model. “We do not compete with our customers as we have no interest in the retail business,” says Salgado. “Our business’s greatest asset is the trust of the telecoms operators.” Following the onboarding of Nowo in 2020, all of Portugal’s major telecom operators are now customers of dstelecom.

Cube partnered with dstelecom in 2018, providing both financial and business expertise. Since then, the network has grown from 300,000 homes passed to 450,000 homes passed, across 99 municipalities – over a third of Portugal’s mainland.

“We have also multiplied EBITDA threefold over the past three years, despite some difficulties connecting new customers due to covid. And we have launched in 2020 significant projects to expand our network over the next three years,” Salgado adds.

The ambition is to continue deploying infrastructure to reach more than 95 percent of the population in the regions covered by the network, and to extend into underserved municipalities. “We are also excited to use our infrastructure and connectivity to support the development of smart cities and 5G, which will need strong backhaul and capillarity for cells density,” says Salgado.

Finally, ESG is a critical component for dstelecom. Working closely with Cube, the company has notably equipped telecoms centres in 36 municipalities with PV panels, reducing by 20 percent the energy consumption and is launching a cooling efficiency project. dstelecom is also leading R&D projects in partnership with MIT and Portuguese universities to develop new environmental monitoring systems.

Last year, the company launched a connect generations initiative to use connectivity in order to help reduce loneliness among the elderly population, as well as the Estou project to reduce the social isolation of patients hospitalised. “We are just at the starting point,” says Salgado. “We look forward to continuing to grow our networks and helping to create a sustainable and inclusive digital society.”