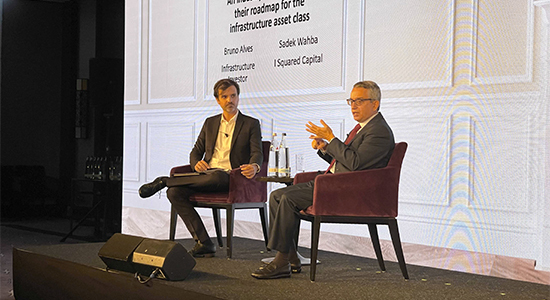 Although the fate of the bipartisan infrastructure bill in the US continues to hang in the balance, Sadek Wahba, founder and chairman of Miami-based I Squared Capital, is optimistic that the bill will pass in the end.

“It’s absolutely critical that that bill passes,” he said during a fireside chat that kicked off Day 3 of the II Global Summit on Wednesday. And Wahba, who has made the case for a US infrastructure bank, IRAs dedicated to infrastructure and a number of other funding solutions, had plenty of data to back up his statement.

For example, from a competitiveness perspective alone, the US has invested less than 1 percent of GDP in its infrastructure since 1970, compared with the 8 percent China has invested since the 1980s. Competition aside, however, the United States’ infrastructure needs are massive totalling roughly $5 trillion, which he broke up as follows:

“The first is… upgrading what is crumbling infrastructure – roads, bridges and so on,” Wahba said. Then there’s the issue of modernising it so it’s up to 21st-century standards; then there’s the need to add new stock and make it resilient.

Asked whether he was concerned the $1.2 trillion bill, should it become law, crowd out private capital, Wahba responded: “The ability to crowd out is essentially non-existent in my mind.”

“I’m very, very concerned about rising interest rates especially on [telco] assets with some racy valuations. If we see interest rates go up to 2-3%, some people are going to see some real issues in the next few months.”

The final session before lunch on Wednesday was certainly one to whet the appetite with a keynote interview with Global Infrastructure Partners’ chairman and managing partner Adebayo Ogunlesi. The GIP chief expressed his bullishness on gas and midstream in particular, and described a shift in thinking at the outfit when asked about stranded asset risk.

“What we try to do when investing in midstream is we put much less value on the terminal value of the asset than we used to,” he said. “When you start seeing more and more investors exiting fossil fuels, you have to worry about that. But if you assume there’s no terminal value, is this still an investable asset? If the answer is yes, because of long-term contracts or because you think gas will continue to be a transition fuel for the long-term, then you can still invest in it.”

Those boxes were probably ticked last year when GIP led a chunky $10.1 billion deal for 38 gas pipelines in the United Arab Emirates, where the long-term future is probably rather secure.

Renewables’ wall of capital? More of a dearth…

Much has been said about the volume of renewables funds and their increasing share of the cash hitting the infrastructure market. However, US-based CIM Group’s managing director Michael Hoverman was keen to debunk any myths about a wall of capital.

“What we’ve seen over the last 10 years is a huge amount of capital, to the tune of over $1 trillion, invested by private equity funds into the energy sector. Only about 12 percent of that has been invested into renewables,” he told morning attendees. “There really is a backlog of supply that needs to be brought to market to address the needs. What that really means is there’s an actual dearth of capital in the renewables sector. That capital need not be invested in operating assets but in developing and construction.”

Gauntlet laid down, it’s time for the shovels, it seems.

‘Consistency’ is key to linking impact to carry

“It’s a question of being consistent. If you’re driving your business through impact, everything has to be aligned, from remuneration on a yearly basis to carried interest; otherwise the alignment is not quite clear,” said Thierry Deau, founder and chief executive of French manager Meridiam.

If you’re taking a look at the intersection of impact investing and infrastructure – as we know many of you are – you could do worse than taking a good look at what Meridiam is doing.

With €15 billion in assets under management, Deau called Meridiam “an impact investor using infrastructure to do impact. Impact drives the entire investment process”. In case you’re wondering what its LPs think of Meridiam’s impact mission, Deau said LPs tend to question the firm closely to ensure it doesn’t compromise on financial returns in the pursuit of impact, “but once that was clarified, we got a lot of support”.

To read more about Deau and Meridiam, check out our affiliate title New Private Markets.