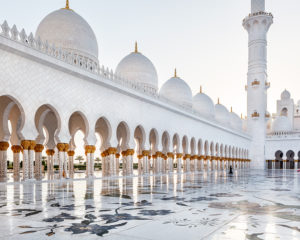 Across the globe, few countries face greater infrastructure shortfalls than those of the Organisation of Islamic Cooperation. OIC countries lag even the developing world when it comes to roads, rail, electricity and overall global competitiveness, with a lack of financing among the culprits.

At the same time, the global market for Islamic finance has skyrocketed. In less than a decade, the market grew from just over $600 billion in 2008 to nearly $1.6 trillion in 2015.

Yet, Islamic finance has contributed relatively little to the infrastructure sector. A dearth of data makes it difficult to quantify, but Fida Rana, an expert in public-private partnerships and a consultant for the World Bank, estimates that greenfield PPP transactions total roughly $600 million to $700 million in Islamic finance annually.

International financial institutions, led by the World Bank and the Islamic Development Bank, are looking to address this shortfall. Last autumn, the two multilaterals jointly released a report titled Mobilising Islamic Financing for Public-Private Partnerships. It presented the potential and challenges of tapping sharia-compliant capital to build up infrastructure in developing markets.

What is Islamic finance?

The main distinction between Islamic and conventional finance comes from the former’s prohibition of the use of interest, which stems from sharia (Islamic) law’s ban on usury. A handful of structures have been created to allow for transactions that mimic conventional tools. Among the most popular in the PPP space are istisna, a contract under which the manufacturer agrees to deliver an asset at a predetermined time at an agreed price; ijarah, a lease-like structure entailing the sale of usufruct under a set rent and period of time; and murabahah, a sale at an agreed mark-up. Sukuk, financial instruments representing an ownership share in an asset, are the most well-known tools in Islamic finance but are rarely used for PPPs.

“The hallmark of Islamic finance is that transactions have to be asset-backed and there has to be risk sharing,” Walid Hejazi, a professor at the University of Toronto specialising in Islamic finance, explained in January at a World Bank conference on the subject.

Deals made under a sharia-compliant structure are subject to approval by an Islamic scholar or a sharia board, which sometimes leads to delays.

Rarely, if ever, do developers or governments require that a project be financed through sharia-compliant structures. Generally, a given project which utilises Islamic finance taps conventional financing sources alongside them.

This was the case for the construction of the €318 million Konya integrated health campus, an 838-bed hospital in central Turkey. The Islamic Development Bank Group provided €67.5 million in financing facilitated by the istisna structure. A special-purpose vehicle was established to build and operate the facility and to procure all non-medical equipment, with this transaction done according to Islamic principles. At the same time, the European Bank for Reconstruction and Development and the Black Sea Trade and Development Bank provided traditional loans of €147.5 million and €50 million, respectively.

Although conventional financing is generally employed alongside Islamic financing, this is not always the case. In the Karachi Thatta dual carriageway project in Pakistan, the banks deployed a musharakah structure in which partners contribute capital for a business venture. A key to these deals is that the financiers must serve as a party to the contract rather than simply as a money lender.

“As such, the Islamic financiers must assume roles such as asset construction contractors, asset owners and asset managers,” the World Bank report explains. “However, because they are financial institutions, they cannot perform these tasks.” In practice, the financiers appoint an SPV to build, manage and jointly own the project assets under the agreement. After the construction is complete, the SPV buys the asset from the financiers under previously agreed terms – the equivalent of debt repayment under traditional financing.

“Islamic finance is really designed for infrastructure,” Khaleel Ahmed, a chief investment officer at the International Finance Corporation, said at the January conference.

For one, infrastructure investments are prime candidates to meet the foundational asset-backed nature of Islamic financial transactions. There is also a natural degree of risk sharing. Additionally, the report notes, other restrictions such as the Islamic bans on speculation and investments relating to alcohol or pharmaceutical drugs are not relevant. And PPP deals allow investors to clearly identify which assets are part of the transaction.

“In other words, PPP projects using conventional financing do not need any structural changes to accommodate Islamic finance,” the report says.

So why has this market so far failed to take off? One complication is the legal structure, which differs between nations and jurisdictions. Transferring ownership of an asset can create complications, particularly if the correct enabling environment is not in place.

“In a given country, if there is no Islamic finance legislation such a transfer of ownership, which is done only for financing purposes, may be considered as a regular asset transfer,” Volkan Celen, a counsel for the Multilateral Investment Guarantee Agency, explained at the conference. “It may create many legal and tax implications.”

Some governments may insist on retaining ownership in a PPP deal, barring even an ownership transfer done for sharia-compliance purposes.

Even if a suitable legal structure exists, involving Islamic financing can make the legal side of the equation more arduous, especially when it is used alongside a traditional tranche.

“The pure volume of documentation is sometimes a bit prohibitive to get a transaction through the door if there are significant time pressures, because there are a lot of documents,” Shane Wilson, a Dubai-based partner at Squire Patton Boggs with experience in Shariah-compliant project financing, tells Infrastructure Investor.

Rana, a co-author of the World Bank report, points to a lack of experience and familiarity with Islamic structures.

“It is the fear of the unknown, if I may say, that is a big challenge,” Rana tells Infrastructure Investor. Turning to Turkey, where a hospital PPP in Manisa followed the project in Konya, he explains, “Once the first project was done, the second project was very smooth because by that time the conventional banks which were present there knew how Islamic finance worked and what documentation was needed.”

To this end, the World Bank report makes a series of recommendations. Reversing the lack of awareness will create a “virtuous cycle”. While the report includes eight case studies, additional studies are called for along with a data repository on Islamic finance for PPPs. A fund established by multilateral development banks “would serve as an important platform and catalyst for the mobilisation of capital into infrastructure PPPs”.

“Political will, clear policy from the government and support from regulators to actively fill the gaps in laws, regulations and regulatory and supervisory capacity are necessary for Islamic finance to develop,” the report concludes.

While the report focuses mostly on multilaterals and larger financial institutions, local Islamic banks can also play a role. Projects can include a local currency tranche to bring local capital off the side-lines.

Though success so far has been limited to a few countries, Rana believes the trend is clearly towards growth.

“In my opinion,” he says, “the perspective is bright”.