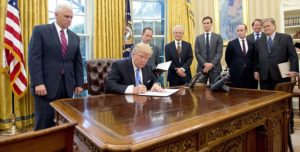 With China in mind, President Trump is set to sign legislation on Monday that clamps down on government-backed foreign investments in assets deemed critical to national security, a move that could affect the standing of the US as an international infrastructure market.

The law Trump is signing calls for inter-agency body the Committee on Foreign Investments in the United States to update regulations on which industries and assets should be guarded against overseas investments based on national security interests. The move is an effort by the Trump administration to restrict foreign access to emerging technologies and limit influence over important infrastructure.

Sylwia Lis, an international trade and compliance lawyer at Baker McKenzie, said concerns about increasing activity from Chinese state-owned enterprises in the US and elsewhere is driving the legislation, which is called the Foreign Investment Risk Review Modernization Act. However, once it becomes law, she said, FIRRMA could affect “foreign investments across the board”.

Currently, CFIUS has a limited purview, but despite how its rules end up being defined, FIRRMA will increase the agency’s jurisdiction over investments, Lis said. That will include a “paradigm shift” written in the legislation that requires all foreign investors acquiring what the committee views as a substantial stake in a critical company or asset to declare their transaction. Lis said interests of less than 10 percent are not likely to come under scrutiny.

“CFIUS has always had the power to initiate a review on its own, but outside those circumstances, there was no legal requirement for parties to make a submission,” Lis explained. “It is possible other investments, including infrastructure, could be designated by CFIUS as requiring a mandatory declaration.”

In addition to declaring non-controlling stakes, FIRRMA calls for foreign investors in critical infrastructure to take observer rights and a passive voice on investment boards.

“CFIUS now has the jurisdiction to review such an investment, on national security grounds, subject to certain limitations,” Lis said. “Foreign investors involved in infrastructure projects, when assessing their CFIUS-related risk profile, need to look at that threshold somewhat differently from the way it is right now.”

Tight or ‘loose and broad’?

As the inspector of foreign capital coming into the US, CFIUS is mainly limited to reviewing deals involving what 16 government agencies deem to be industries and assets critical to national security. Lis said there is no precise definition for what is critical, but a general understanding is that sectors such as semi-conductors, which are used to make microchips, are watched closely, as well as energy, transportation and telecommunication assets.

It is currently unclear how far-reaching CFIUS’s new rules will be. The committee will undergo a review process and issue new regulations in around 18 months. Lis said the committee could either lay out clearly what types of investments will trigger a review, or it could keep the definition “loose and broad” to allow flexibility when making decisions.